Where were you when the world was supposed to descend into chaos? Do you remember? I do. My sis Hillene and I were in the balcony seats at the Lake Charles Symphony’s annual New Year’s Eve bash. As usual it was held at the Civic Center. The floor seats were for the A-listers, and every table was full down there.

They wandered around, everyone dressed to the nines (pardon the cliche), and mingling, mingling, mingling. The hoi polloi—that would be us—were in the balcony, up in the nosebleed section, wearing blue jeans, sweatshirts, and hooded jackets. I don’t remember what Hillene’s choice of footwear was, but I was festive in my four-year-old Reeboks.

We spent the hour or so before the performance watching the crowd on the floor, trying to see if we knew anyone down there. We saw two women meet up on the floor wearing the same dress. They seemed to be good sports about it, but obviously they hadn’t found them on the rack at WalMart. Probably a little buyer’s remorse for having spent so much money trying to be original. 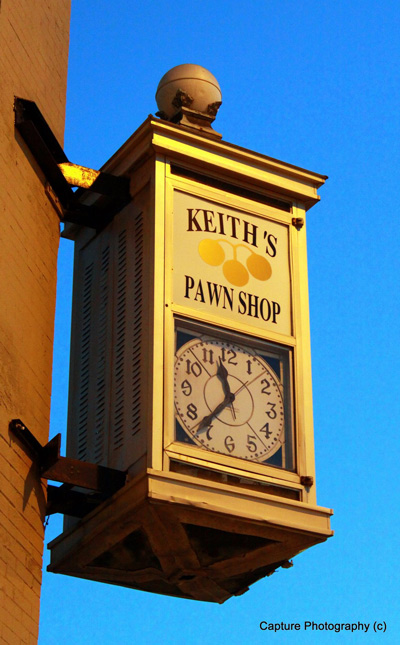 The performance was its usual outstanding endeavor, and ended around 11:00. While the floor crowd made its way to their various parties or homes, Hillene and I decided to make our way a couple of blocks over to the corner of Ryan and Broad where we heard there was going to be some kind of gathering to welcome in a new century. Or maybe not. Maybe the world was going to shut down.

A crowd of people, similarly dressed, met us there and told us a ball was going to descend on Keith’s Pawn Shop—there on the corner of Ryan and Broad Streets in Lake Charles, Louisiana, at the stroke of midnight, Central time. Well, we decided, we couldn’t miss that. Eat your heart out Times Square.

Now, you may be wondering what two sixty-something women were doing wandering around the downtown area of Lake Charles by themselves. To tell you the truth, we didn’t even think about it. We were just a bunch of human beings—black, white, brown, young, old—who wanted to be a part of the celebration, and celebrate we did. I don’t remember exactly the number they started the countdown with. I just remember watching that ball come down. I remember yelling, “Three. Two. One. HAPPY NEW YEAR.” We even hugged a few people we didn’t know.

Guess what. The world didn’t blow up. We all went home to start a new century and what a ride it’s been. I will say this—it has never been boring.

From The Bayou To The Big League: The Odyssey Of … END_OF_DOCUMENT_TOKEN_TO_BE_REPLACED

Update Update on From the Bayou to the Big … END_OF_DOCUMENT_TOKEN_TO_BE_REPLACED

A quick update on my dad's book. I'm nearly … END_OF_DOCUMENT_TOKEN_TO_BE_REPLACED

I'm coming along on schedule with From the Bayou … END_OF_DOCUMENT_TOKEN_TO_BE_REPLACED