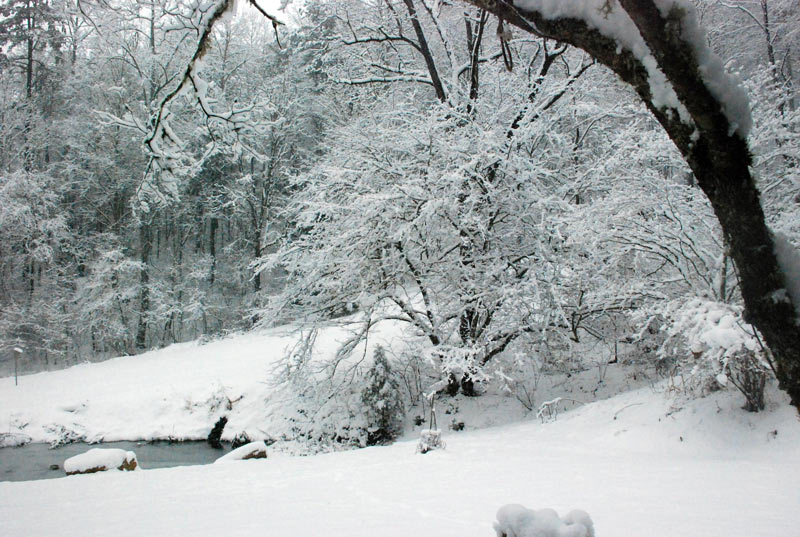 Dog Days on steroids and still a month to go. How about some relief from triple-digit temps and humidity out the wazoo? How about my recollection of the winter of 1948—the coldest winter down here that I can remember? I was twelve and Hillene was seven.

First it snowed a lot, then it froze—hard. We could actually skate around on the snow. Then it snowed again and the temperature stayed down for days. Mommie, our great-grandmother, in her eighties, got outside with us and helped us roll the snow into a giant snowball. We proceeded to roll it around the yard where it continued to grow.

Our neighbor from down the road, Jim, is Hillene’s age, and his sister and I are the same age. Jim came down and told Hillene their pond was frozen over and we could have a lot of fun skating. So we headed off to their house, along with another of the neighbor boys, EJ. I can’t remember if anyone else joined us, but there were at least five of us slipping and sliding and falling, and having more fun since it had gotten too cold for splashing in the river.

We had been skating in circles around the edge, and I guess EJ got tired of circles and decided to skate straight across. When he got to the middle he fell through. The pond was only waist deep,but it was deep enough to fill his hip boots with freezing water.

Kids can be mean, and we were typical kids. We yelled at him for ruining our playground. He squished off to his house where his mother got him dry and put him to bed. We went merrily off to find another adventure. The pond was cracked across, but there was still plenty of snow. Maybe a snowball fight? I’m sure we found something.

We’ve had a few snows since—very few and far between. Nothing ever came close to the winter of “48.

From The Bayou To The Big League: The Odyssey Of … END_OF_DOCUMENT_TOKEN_TO_BE_REPLACED

Update Update on From the Bayou to the Big … END_OF_DOCUMENT_TOKEN_TO_BE_REPLACED

A quick update on my dad's book. I'm nearly … END_OF_DOCUMENT_TOKEN_TO_BE_REPLACED

I'm coming along on schedule with From the Bayou … END_OF_DOCUMENT_TOKEN_TO_BE_REPLACED