Okay. I admit it. I’m a dinosaur. Change does not come easily to me. Do you remember where you were on December 31, 1999? I do. I was in the street, along with my sister Hillene and a bunch of other folks, waiting for the ball to drop. We waited in excited anticipation, watching the clock at Keith’s Pawn Shop on the corner of Ryan and Broad in Lake Charles, Louisiana. Eat your heart out, Times Square. Your crowd had nothing on us. The ball came down and at midnight we were hugging each other and singing “Auld Lang Syne” as loud and lustily as the gang in New York.

The year 2000. A new century. A new millennium, some said, but there was some argument about that. I don’t know and frankly I don’t care. A new century for sure. What followed was an explosion of new technology that is still going on today.

I used my computer mostly as a word processor for typing. It was the best thing to come down the pike for writers. It did a lot of other things that I couldn’t be bothered to learn. I did manage to engage in email when it came along. 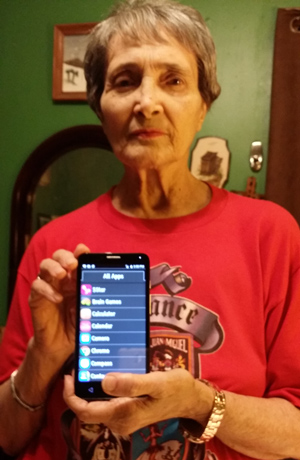 Then all of a sudden everyone was walking around with a small gadget stuck to their ears, jabbering as they strolled along the street, in the mall, at the grocery store, etc., etc. Those of us in the vicinity of said conversations were recipients of way too much information (TMI in today’s lingo.) I was perfectly happy with my antiquated land line. To my way of thinking, having one of those contraptions was like being on a leash. Sometimes one just doesn’t want to be found.

Next came text messaging. Now they didn’t even have to talk to each other. Just type a few words and hit send. Nice way to have a conversation. It was used to impart much wisdom, such as “I just had a Big Mac at Mickey D’s.” Now you go to a restaurant and everyone has their heads down punching letters into their phones instead of talking to the people sitting across from them.

However, yours truly stayed above the fray. I clung to my land line like a life jacket. For a while, anyway. People kept telling me I needed a cell phone for no other reason than to use if I had car trouble on some dark road in a storm. I pointed out I had gotten along just fine for some seventy odd years without one. They finally wore me down and I bought a Jitterbug, made especially for senior citizens. I kept it in my purse and used it only to call out. I never heard it ring. I would just check it now and then, but most of the time it would be dead because I forgot to charge it.

Then one day I decided to take another step—I added text messaging, and found it came in handy from time to time. It was slow going, though, because it didn’t have a keyboard. I took forever sending texts because, being an English major, I never used the shorthand everyone else employed.

Then came yesterday—July 9, 2016, a red-letter day for Linda Todd. I went to Best Buy and bought a Jitterbug Smart. Now I can call, send text messages (with a keyboard, yet), take pictures, send and receive email, check out Facebook. All I have to do now is learn to use the infernal machine.

I wish I could have been a fly on the wall when the nice young man finished walking me through the set-up. He and his coworkers probably had a good laugh about the ditzy old woman he had just spent an hour trying to bring kicking and screaming into the 21st Century.

From The Bayou To The Big League: The Odyssey Of … END_OF_DOCUMENT_TOKEN_TO_BE_REPLACED

Update Update on From the Bayou to the Big … END_OF_DOCUMENT_TOKEN_TO_BE_REPLACED

A quick update on my dad's book. I'm nearly … END_OF_DOCUMENT_TOKEN_TO_BE_REPLACED

I'm coming along on schedule with From the Bayou … END_OF_DOCUMENT_TOKEN_TO_BE_REPLACED