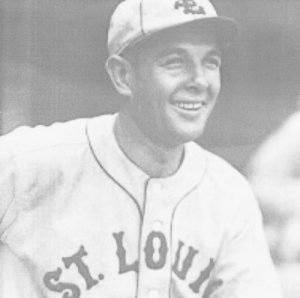 In 1933 Wallace “Preacher” Hebert ended the season with a league-leading .391 batting average.

“Every time we would go up against the Philadelphia Athletics, Simmons would get all over me,” he recalls.

Back then sports pages listed the leading hitters disregarding the number of times they faced opposing pitchers. Hebert stayed on top of the American League batting race all year long. When Simmons checked the newspaper each day for his average, whose name always appeared before his? Wally Hebert of the St. Louis Browns, the perpetual cellar dwellers.

How is this possible, you might ask. Being a pitcher he went to bat a mere twenty-three times. Nine of those times he got a hit. Do the math, folks. Nine divided by twenty-three is .391.

“Simmons always wanted me to see more action, figuring that if I went to bat more I couldn’t possibly keep up that high average.”

Simmons was probably right, but being bested by a pitcher must have rankled. The southpaw from the Louisiana bayous took great delight in reliving the time he beat out one of baseball’s greatest hitters.

From The Bayou To The Big League: The Odyssey Of … END_OF_DOCUMENT_TOKEN_TO_BE_REPLACED

Update Update on From the Bayou to the Big … END_OF_DOCUMENT_TOKEN_TO_BE_REPLACED

A quick update on my dad's book. I'm nearly … END_OF_DOCUMENT_TOKEN_TO_BE_REPLACED

I'm coming along on schedule with From the Bayou … END_OF_DOCUMENT_TOKEN_TO_BE_REPLACED