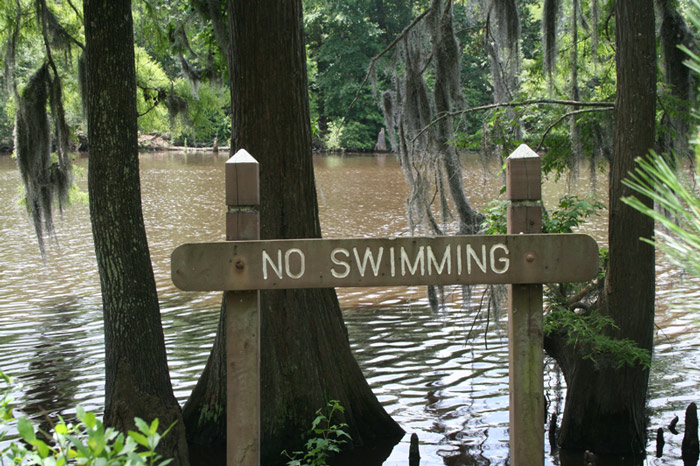 The ironing room in the house at the end of Westwood Road was also the dining room. In one corner sat a motorized ironer for large, flat things like pillow cases and the bottoms of blouses, men’s shirts and pants. The top parts—collars, sleeves, etc., were tended to on the wooden ironing board with the flat iron. Everything was starched, of course, except pillow cases.

It took two people on ironing day, and it usually took all day with a break for dinner. My mother manned the ironer, and one of the other adults took care of the ironing board. Speaking of which, you might run across one in an antique store or flea market. If you’re lucky enough to find one, grab it, varnish it, and hang your quilts on it. That’s what they’re being used for today.

But I digress. The real story here is the mysterious spot that appeared on the ceiling just above the ironing board. It was summertime and there were several cousins spending some time with us. One of them—I’ll call him “Bill”—was the same age as my second brother, David—the adventurous one. They slept in the same room and roamed the neighborhood during the day. They were quite young—eight or nine. 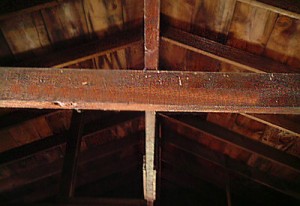 Back to the spot. Inspection of the roof yielded no clues. It was in perfect shape. Next stop, the attic. Bingo! Two pair of boys’ blue jeans and shirts hung from the rafters, dripping into a small puddle on the attic floor which in turn leaked through the crack in the boards and ended up seeping through the sheetrock ceiling.

Further investigation uncovered what happened. No one was supposed to go swimming until my sister’s husband got home to take the younger ones. On this particular day David and Bill went down to the river to watch the boats passing by. Boys will be boys and these two were no different.

Watching boats chug-a-lugging down the West Fork got boring, so they got poles from my dad’s stand of bamboo. A ball of clay positioned on the end of a bamboo pole makes a first-class ballistic missile. It was a lot more fun watching people dodging clay balls.

That got boring, too, so David decided to swing out over the water on the rope swing and jump back on the wharf on the back-swing. Bill grabbed the rope, so David went ahead and jumped into the water. Bill said, “What the heck?” and took the swinging jump also.

They were both good swimmers, but that wasn’t the point. They were not supposed to be in the water—period. How to get out of this one?

They managed to sneak back into the house undetected and make it upstairs to the middle bedroom and the attic there. They took their wet clothes off and hung them on the rafters, where said clothes continued to drip, drip, drip. Do you know how much water 100% cotton jeans can hold?

I don’t remember what the repercussions were, but I bet David and Bill weren’t among the swimmers that afternoon.

Thanks to Bill for sharing the rest of the story.

From The Bayou To The Big League: The Odyssey Of … END_OF_DOCUMENT_TOKEN_TO_BE_REPLACED

Update Update on From the Bayou to the Big … END_OF_DOCUMENT_TOKEN_TO_BE_REPLACED

A quick update on my dad's book. I'm nearly … END_OF_DOCUMENT_TOKEN_TO_BE_REPLACED

I'm coming along on schedule with From the Bayou … END_OF_DOCUMENT_TOKEN_TO_BE_REPLACED