My father tossed his last curveball, hung up his cleats, and said goodbye to his baseball teammates forever. We came back to southwest Louisiana for good. We had been living in Lake Charles in the house on Foster Street during baseball’s off season for several years. Our last season was spent in Pittsburgh, where he pitched for the Pirates.

My parents broke the news that I would start third grade in a place called Westlake, a little town across the lake from Lake Charles. There was a horse, a cow with a calf, a pig, and some chickens. The house was a gabled structure, a story and a half high, sitting on three and a half acres of mostly overgrown land.

Our first trip there seemed to take forever to my eight-year-old self. I had never been so far out in the country before. We were at the very end of Westwood Road, which ran all the way through the town, starting at the lake and ending at the West Fork of the Calcasieu River.

We went into the house, looked it over, and tramped around what part of the grounds we could get to. Even at my young age I wondered what had possessed my parents to make that move. 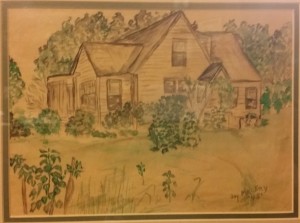 The house, to me, was huge. Downstairs was a living room, dining room, large kitchen with breakfast nook, a den with knotty pine walls, and a big bathroom. Upstairs—three large bedrooms, a half-bath (no tub), and two attic rooms next to two of the bedrooms—hence the story and a half instead of two stories, which would have the attic above the bedrooms.

It seemed too large for just the four of us—Mama, Daddy, my three-year-old sister, Hillene, and me. That’s when I learned three more people would be arriving the next week—my grandparents and my great-grandmother would be living with us.

While I was excited about my grandparents coming to live with us, I was still apprehensive about everything else. Daddy picked me up and took me to the upstairs bedroom that would be theirs for several decades. We stood at the window and looked out.

“What do you see on the other side of those trees?” he asked.

“I see some water,” I answered.

“Let’s go have a look,” he said. We left the house and took a short walk through the woods.

That’s the first time I saw the West Fork River and that’s when I knew I was home.

From The Bayou To The Big League: The Odyssey Of … END_OF_DOCUMENT_TOKEN_TO_BE_REPLACED

Update Update on From the Bayou to the Big … END_OF_DOCUMENT_TOKEN_TO_BE_REPLACED

A quick update on my dad's book. I'm nearly … END_OF_DOCUMENT_TOKEN_TO_BE_REPLACED

I'm coming along on schedule with From the Bayou … END_OF_DOCUMENT_TOKEN_TO_BE_REPLACED