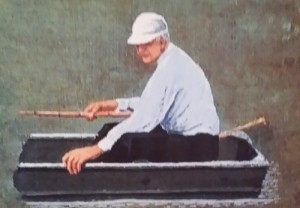 The young skier laughed as the spray from his water skis washed over the old man sitting in his bass boat. He signaled the driver to make another pass at the fisherman, who was wringing out his baseball cap before returning it to his head, now plastered with sodden salt-and-pepper strands of hair. The young man was having fun. This was his contribution to clearing the lake of unwanted anglers who got in the way of real sportsmen, the water skiers.

This would be his third pass at the geezer. Maybe this time around would do the trick. The ski boat banked and made the turn, heading straight for the green metal boat. Just as the skier turned for a third drenching the old man stood.

The young man saw the fishing rod swing toward him. The flat side caught him squarely on the stomach, and he went flying into the lake, losing both skis in the process. His driver idled the motor, bent double laughing at his hapless friend, who thrashed around trying to figure out what happened. Neither the driver nor the skier saw the fisherman paddle calmly toward shore. The young men would have been surprised had they known the old man’s history. Perhaps they wouldn’t have been so quick to take him on.

Wallace “Preacher” Hebert was a oner, and he picked up his nickname in grammar school. It followed him throughout his long, diverse life. Will Rogers once said he never met a man he didn’t like. Preacher went him one better. He never met a man who didn’t like him. As the years passed, more and more of his friends, coworkers, and family members said goodbye to this world.

“There won’t be anyone left to see me off,” he often joked. He would have been surprised at the steady stream of condolers on visitation night and the standing-room-only crowd in the chapel the day of the funeral. There were plenty there to see him off: wife, children, grandchildren, great-grandchildren, former coworkers, hunting and fishing buddies, seven siblings, and assorted extended family. The eulogies went on for some time. Nearly everyone had a “Preacher” story to tell.

He was in my life from the day I was born until the day he died. I observed nearly every phase of his life. Early on I remember those dark Cajun looks. The curly hair, the laughing eyes, the pug nose that’s a strong familial trait. Tall and solidly built, he had an athlete’s fluidity of movement. I remember his hands, so big they could envelop a baseball, strong enough to skin an alligator, yet with a touch so delicate he often bested his sisters playing jacks. The dark, curly hair grayed and thinned over the years, but the laughing eyes were there until they closed for the last time. 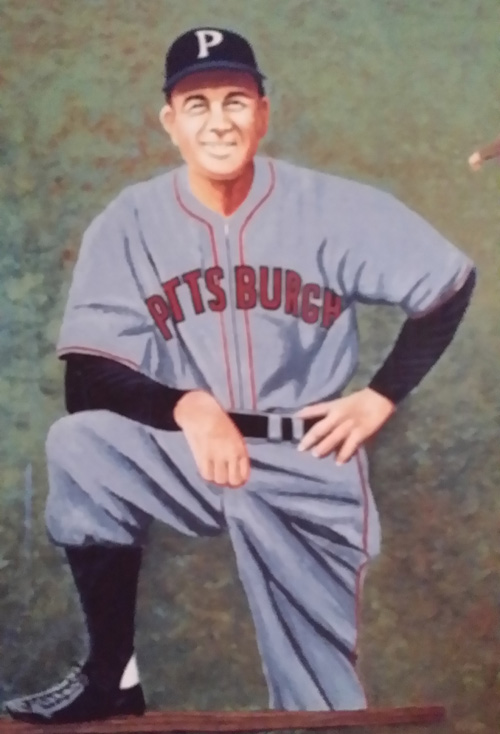 He excelled in all sports, but his passion was baseball. He was amazed he could actually get paid for doing something he loved. However, when it was time, he hung up his cleats and went on to the next phase, employment with the Firestone Rubber Company. He never tried to relive the past through his children. Of the five of us, only two showed any real interest in sports, but that was fine with him. He always supported us in everything.

His retirement years afforded him the opportunity to pursue his other passions. He hunted ducks in the fall and winter. Spring and summer was the time for fishing and gardening. He skinned alligators during ‘gator season and read “shoot-em-up” paperbacks when the weather was too bad for anything else.

His talents extended to the kitchen as well, where he could whip up a mean gumbo or fried fish, filleted by him, of course, so we wouldn’t swallow bones.

A snapshot shows him sitting in his pirogue in a quiet backwater of the Calcasieu River, an old man fishing, his face shaded by a battered baseball cap. A stranger might be surprised to know he’d been equally at home on the pitcher’s mound in St. Louis, San Diego, or Pittsburg. That snapshot is only part of his story. He was in my life a long time, and I regret he’s no longer part of it.

A dictionary definition: Oner—A unique or extraordinary person or thing. One of a kind. That’s my dad.

From The Bayou To The Big League: The Odyssey Of … END_OF_DOCUMENT_TOKEN_TO_BE_REPLACED

Update Update on From the Bayou to the Big … END_OF_DOCUMENT_TOKEN_TO_BE_REPLACED

A quick update on my dad's book. I'm nearly … END_OF_DOCUMENT_TOKEN_TO_BE_REPLACED

I'm coming along on schedule with From the Bayou … END_OF_DOCUMENT_TOKEN_TO_BE_REPLACED