My brother, David—#4 among the siblings—always liked to push the envelope. And that extended to visiting the river unaccompanied from an early age—four or five years old. Any time he went missing he could usually be found on the riverbank tossing sticks into the water for the dog to retrieve. Nothing seemed to work keeping him away from there. 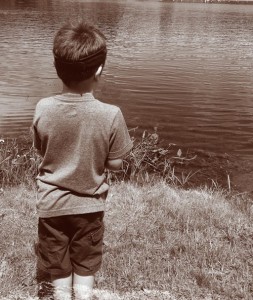 My grandmother started telling him about the Old Man of the River. David better be careful or the Old Man was going to get him and carry him off one of these days, and then we wouldn’t know where to find him. That didn’t work, either.

One afternoon Grandma B. saw him start down the path, followed by the dog. She ran into the house, threw on some of my dad’s overalls, my granddaddy’s coat and floppy hat, and some brogans. She took an alternate path and got to the riverbank before David and the dog.

When they got there, they were greeted by this apparition with no hands and empty sleeves flopping around. Strange noises emanated from the creature, and it started a weird jerky dance. The dog went into protection mode, staying between the odd being and David, running to and fro and snarling.

The creature started howling and dancing closer. David, even at his young age, knew it was time to leave, so he and the dog made it back to the house in record time.

David never said anything to anyone about what he had seen, but my grandmother filled us in on what happened, and it became part of the family lore—at least among us older ones.

From The Bayou To The Big League: The Odyssey Of … END_OF_DOCUMENT_TOKEN_TO_BE_REPLACED

Update Update on From the Bayou to the Big … END_OF_DOCUMENT_TOKEN_TO_BE_REPLACED

A quick update on my dad's book. I'm nearly … END_OF_DOCUMENT_TOKEN_TO_BE_REPLACED

I'm coming along on schedule with From the Bayou … END_OF_DOCUMENT_TOKEN_TO_BE_REPLACED