When I was growing up, back in the day, we didn’t have cell phones or computers or video games. We had to make our own fun, and one of our favorites was the old-fashioned hayride. I don’t know if they’re even around any longer. I think not. I can’t remember any of my children ever going on one. 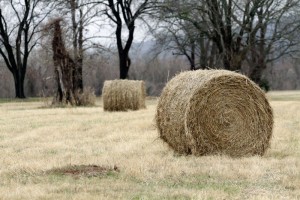 A large flat-bed trailer with railings all around would be filled with hay scattered over the surface, usually several inches thick. It would be pulled by either a big tractor or a good sized truck with a powerful engine. We rode around town singing and waving and usually ended up at a park or someone’s place out in the country or on a riverbank somewhere. A wiener roast followed, complete with toasted marshmallows—no S’Mores yet.

Hayride fashion consisted of rolled up blue jeans, about mid-calf for the girls, ankle high for the guys; white low-top tennis shoes for the girls, high-tops, usually black, for the boys. A lot of times the girls wore their fathers’ white dress shirts tied in a knot in front.

This is the story of my last hayride.

Graduation was over. The Class of ’53 was gone. We were the big dogs now—seniors at last. The floodwaters had finally subsided, the last day of school approached, and summer vacations loomed just around the corner. We wanted to celebrate so we decided on a hayride and wiener roast at Holbrook Park on the last day of school.

We gathered at the school at dusk wearing our rolled up blue jeans and tennis shoes. I was with my boyfriend. My cousin, Jan from Baytown, Texas, was visiting us so we fixed her up with a blind date with one of our classmates.

Everyone was there, raring to go—that is, everyone except the chaperones. Well, we did have the truck driver who was an adult. Then there was the boyfriend of a classmate. He had graduated the year before. We decided he would do, so off we went—a bunch of sixteen-year-olds with a stranger driving the truck and an eighteen-year-old guy in charge.

The ride to the park was the usual: singing the Ram fight songs, talking about the summer, our upcoming senior year, and our chances in football. When darkness fell, however, things quieted down quite a bit—mostly whispers and giggles now.

The fire was blazing up pretty good when my date grabbed a package of buns and some wieners, and suggested we go somewhere quieter to eat. Jan’s date said it was fine with him, but she and I wanted to stay with the group. We started back, and the package of buns went whizzing past my ear and landed in front of me. I picked them up and kept going. He pouted the rest of the time we were there, but had loosened up somewhat when we got on the truck for the ride back.

Jan was next to me and her date was on the other side of her. She seemed restless and agitated, and kept fidgeting all the way back. When we got back home we found my mother in the kitchen waiting for my dad to get off work from the evening shift at Firestone.

“Well, did you all have fun?” Mom asked.

“No,” Jan and I answered in unison.

“That guy’s got more hands than an octopus. I’m worn out.” Jan said.

As for me and my boyfriend, our relationship wouldn’t survive the summer.

Those were fun times. No worries. Carefree days—until school started in the fall. I spent my summer in the river, as did nearly everyone else. The only swimming pool in town was at the Continental Colony, and that was only for Conoco families. However, I never liked swimming in a pool—the river was always my first love.

Back to the hayride. If the teens of today ever went on one there would be no singing, or any conversation, for that matter. Their noses would be in their phones and they’d be texting each other.

So how about you? Does anyone have a hayride story to share?

It’s still National Poetry Month, so here’s my offering for this week.

Stripes of red and white,
Stars of white on blue
Cover boxes on the plane.
The sameness hurts the eye.
Or is it what’s inside
That hurts the most?

From The Bayou To The Big League: The Odyssey Of … END_OF_DOCUMENT_TOKEN_TO_BE_REPLACED

Update Update on From the Bayou to the Big … END_OF_DOCUMENT_TOKEN_TO_BE_REPLACED

A quick update on my dad's book. I'm nearly … END_OF_DOCUMENT_TOKEN_TO_BE_REPLACED

I'm coming along on schedule with From the Bayou … END_OF_DOCUMENT_TOKEN_TO_BE_REPLACED