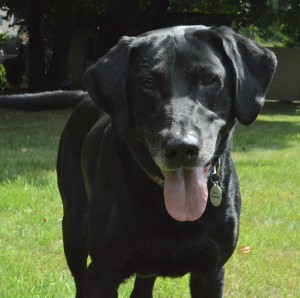 Hillene, David and Stephen (the two youngest Heberts), and two cousins who were staying with us, Hootie and Hill, went down to the river to see who else was there. They couldn’t go into the water unless a family adult was there, so they played around on the bank. The dog had accompanied them, as usual, and disappeared into the brush as soon as they got there.

He stayed in the brush a few minutes while they continued running around on the bank and throwing clay balls into the water. When the dog emerged he had a large cottonmouth moccasin clamped between his teeth. The snake’s head and tail were free.

So here’s this large dog with a snake writhing around his head—and he’s headed straight for the kids. He wants to share his treasure. The kids, of course, wanted no part of it, and headed down the trail to the house as fast as they could run. Stephen was quite young, about three, and Hillene and Hootie each had him by the hand, half dragging, half carrying him along. Hill was way out in front. That left David, who was only a year older than Stephen, to bring up the rear. The dog was right behind him. They were all screaming. The dog thought they wanted to play, so he kept coming.

Every ten steps or so, David would jump straight up, still screaming, and resume running. By the time they barreled into the yard our dad was waiting to dispatch the snake, and make sure the kids and the dog were okay.

Years later, when we were retelling the story, David said that incident had scarred him for life since no one tried to help him. Of course, he was just kidding us—wasn’t he?

From The Bayou To The Big League: The Odyssey Of … END_OF_DOCUMENT_TOKEN_TO_BE_REPLACED

Update Update on From the Bayou to the Big … END_OF_DOCUMENT_TOKEN_TO_BE_REPLACED

A quick update on my dad's book. I'm nearly … END_OF_DOCUMENT_TOKEN_TO_BE_REPLACED

I'm coming along on schedule with From the Bayou … END_OF_DOCUMENT_TOKEN_TO_BE_REPLACED