To My Blog Readers:
I’m working on a memoir/bio of my dad–Wally “Preacher” Hebert–with a deadline of early November, so any writing I have to do will have to be on that book. I’ll share some of the earlier blogs every two weeks between now and the time I get the first draft finished, which I hope will be by the end of May. I’ll let you know from time to time how things are going. Thanks for your patience.

Once upon a time—not all that long ago—there was no television. There were no phones, either, in the countryside outside of Westlake’s town limits, but that’s another story. Back then, no one had television, in or out of town.

Well, we played outside long after the sun went down, chasing fireflies, chasing each other, playing Hide and Seek and Red Rover. And then there were the books. I had gone through the whole set of Zane Grey westerns by the time I got to high school.

Let’s not forget the radio. When we finally came inside from playing or when the weather was bad, we listened to our regular radio programs in our grandparents’ bedroom with Granddaddy. “The Lone Ranger,” where we got our weekly dose of culture listening to the William Tell Overture at the beginning of the broadcast. Who can forget “Hi-yo Silver, away” or “Get-um up, Scout?”

Two of our favorites gave us our weekly dose of the creeps. “The Shadow”—a disembodied voice intoned “Who knows what evil lurks in the hearts of men? The Shadow knows.” Eerie laughter followed those lines. “The Inner Sanctum” opened and closed its broadcast with the sound of a creaking door and a story guaranteed to keep us awake or give us nightmares, especially when I slept in a room next to an attic that creaked and moaned all night. 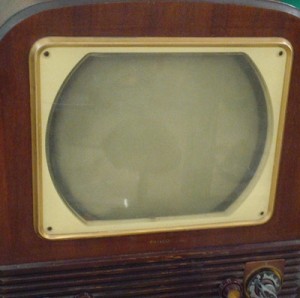 The first television sets showed up as early as the forties, but that doesn’t mean we had one in the Hebert household. The Franklins, our neighbors, were one of the first in the neighborhood to get one. They would invite us over to watch Milton Berle or Jack Benny or Ed Sullivan. There we sat—kids on the floor in a semi-circle and grown-ups in chairs, eyes glued to that contraption that had everyone mesmerized.

We finally got ours sometime after I graduated in 1954. By then Granddaddy was bedridden with emphysema, and his brother bought him a set. It was set up in his bedroom, and we would all go in there to watch, but not all the time. He still liked to play dominos with us and listen to our radio shows. Old habits die hard.

In fact, I think he looked forward to the domino games more than anything else. We were hard-pressed to beat him. I think he let us win from time to time. After two rounds he knew what everyone else was holding. For some reason, what I remember most is him chewing on an unlit cigar and frowning down at the dominos.

“Who downed this mess?” he would say.

But I digress. Back to the television. It was the beginning of a new era—some good, some not so much. I’m sure the younger generations can’t imagine having to sit together in the same room to watch a program they may not be too impressed with. After all, they have their own TV in their room. And dominos? What’s that?

From The Bayou To The Big League: The Odyssey Of … END_OF_DOCUMENT_TOKEN_TO_BE_REPLACED

Update Update on From the Bayou to the Big … END_OF_DOCUMENT_TOKEN_TO_BE_REPLACED

A quick update on my dad's book. I'm nearly … END_OF_DOCUMENT_TOKEN_TO_BE_REPLACED

I'm coming along on schedule with From the Bayou … END_OF_DOCUMENT_TOKEN_TO_BE_REPLACED