In 1963 overseas flights were handled by MATS—Military Air Transport Service. This was how the military transported personnel to their assignments. It carried families to join their deployed husbands and fathers to those bases blessed with family housing. As far as I know MATS is no longer used for that. 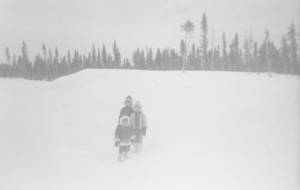 When I got to the check-in, there was a minor altercation taking place at the counter. A well-dressed woman with six children, all looking like they were on their way to Sunday School and all under the age of ten, was most upset. The clerk had just told her she had been bumped from the two-o’clock flight to the one at six o’clock. It seemed that there had to be one adult for every child on board and since she had the most children she would have to wait for the next plane out. I don’t blame her for being upset. I only had three to contend with, and it was a real adventure getting them up and dressed and the suitcase repacked.

As soon as we were cleared we found a vacant bench, and Micki and Katy were soon zonked out. Two-year-old Mollie, however, was wide awake and ready to go exploring. I was constantly having to chase her down. Several other unaccompanied women also had children, but they were mostly asleep, like Micki and Katy.

I finally got Mollie settled on the bench, or so I thought, and started reading my book. Fifteen minutes or so later I looked up to check on everyone and Mollie was gone. I didn’t panic because back then a military installation was one of the safest places around. I knew she couldn’t be anywhere but there in the terminal. It just wasn’t that big.

I saw a group of about fifteen or twenty uniformed men standing in a circle talking. As I got closer I could hear several conversations going on, but I couldn’t understand a word they said. I did see, however, a pair of little white shoes mixed in with all those large black ones. She stood right in the middle of them, trying, I guess, to figure out what the heck they were saying. I found out later they were in the Turkish Air Force on their way to Europe. They weren’t scheduled to be on our flight.

We finally got the call to board, and lined up—women and children first, unaccompanied men last. Three of the men came and picked up each one of the girls and got in line behind me. I thought “How nice.” I didn’t have to worry about the kids. I only had the carry-on to fool with.

The plane had two stops to make: Goose Air Base, where I and the rest of the wives and children would get off. The plane would then fly on to Greenland and drop most of the men at Thule Air Base (that’s pronounced “Tooley,” not “Thool.)

Micki and Mollie sat with me, and Katy sat with our new friends. One of the men had some food, and Katy remembers watching him eat and wished she could have some. I have no idea where the food came from. I just knew we were heartily tired of peanut butter and jelly, but I bet we wouldn’t have turned it down if offered to us.

It took four hours to get to Goose Bay. I thanked our benefactors for all their help, and deplaned. Jack was there with the couple who would become our best friends during our tour. I told them about the nice airmen who had helped me out. They all laughed and said anyone carrying a child could board early and get the best seats. Oh well. No matter the motive, I was still grateful.

From The Bayou To The Big League: The Odyssey Of … END_OF_DOCUMENT_TOKEN_TO_BE_REPLACED

Update Update on From the Bayou to the Big … END_OF_DOCUMENT_TOKEN_TO_BE_REPLACED

A quick update on my dad's book. I'm nearly … END_OF_DOCUMENT_TOKEN_TO_BE_REPLACED

I'm coming along on schedule with From the Bayou … END_OF_DOCUMENT_TOKEN_TO_BE_REPLACED