“My daddy struck out Babe Ruth,” my younger self would tell someone at school.

“Yeah, and mine beat up Superman,” or some other retort that would invariably be forthcoming. 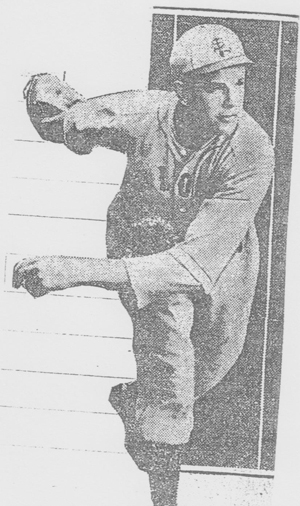 I would plod home and tell my mother no one believed me when I talked about my dad’s baseball exploits. She would drag out the box full of newspaper clippings spanning his fourteen year career playing the game he loved. Out would come a yellowed clipping describing the feat.

It was the rookie season for Wally Hebert, “the brilliant young southpaw from the bayou.” In early June, 1931, he made his big league debut—a short but effective relief appearance before a crowd of 40,000 in Yankee Stadium. He finished his warm-ups and faced his first batter—Babe Ruth, the Bambino himself. The yellowed clipping described the third strike graphically. Ruth went down swinging, “spun around like an April top,” missing the ball by a foot.

My dad also fanned Lou Gehrig and Ruth in the same inning, and got Ruth in three straight appearances. Ruth also hit into a double play, and as he was running back to the dugout, in typical Ruth fashion, he yelled, “You can stick that slow curve right up your . . . .” Well, you get the gist, I’m sure.

After that, Daddy knew how to pitch to him. Ruth loved fast balls right over the plate. None of that from my dad—just the slow wiggly stuff. According to him, Ruth never hit a homer off of him. Being a lefty, he had good luck with left-handed batters.

I would take the clipping to school and show it around. No more snide remarks about beating up Superman. I’m not sure about my brothers, but my sister, Hillene, had to do the same thing with the clipping. It’s a wonder it survived our school years.

From The Bayou To The Big League: The Odyssey Of … END_OF_DOCUMENT_TOKEN_TO_BE_REPLACED

Update Update on From the Bayou to the Big … END_OF_DOCUMENT_TOKEN_TO_BE_REPLACED

A quick update on my dad's book. I'm nearly … END_OF_DOCUMENT_TOKEN_TO_BE_REPLACED

I'm coming along on schedule with From the Bayou … END_OF_DOCUMENT_TOKEN_TO_BE_REPLACED