One day it started to rain—and rain—and rain. Then the wind blew in from the south and the waters started to rise. Soon, for those of us living out of town, the two roads into Westlake were impassable. A section of both Westwood Road and Miller Avenue (aka Hwy. 378) looked like a lake, isolating everything north of John Stine Road from the town of Westlake. 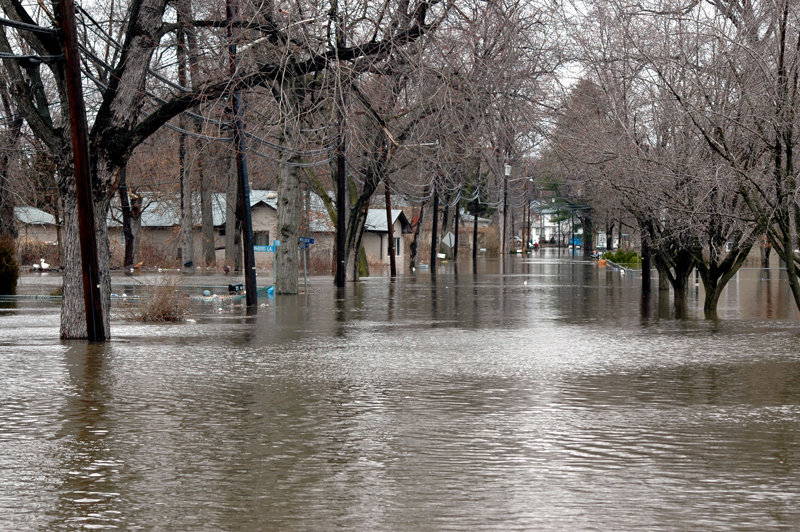 What a dilemma. That meant people like my dad and Mr. George and Mr. McGuire were cut off from their jobs at Firestone. My grandmother and my mother were—horror of horrors—cut off from Rue’s Store. I was cut off from my job at Budge’s Drugstore, but my friend, Mozelle, solved that by inviting me to stay at her house so I could walk down the street to the drugstore.

The intrepid citizens of Westlake, however, didn’t sit around bemoaning their fate. Several motorboats were brought to the two “lakes” to act as ferries. Cars were parked on either side to accommodate the ferry passengers. Volunteers ran the boats and drove the cars. Two-car families found themselves luckier than those with only one. If they were able to get one of their cars to the south side before the waters got too high they had transportation on both sides—just a short boat ride away.

Right in the middle of all this fell graduation. The class of 1953 was due to receive their diplomas. The cheerleaders for the next year were tapped to pass out programs at the ceremony. That included Mozelle and me, and we had to wear a formal gown. Mine, of course, was at my house across the “pond,” but I got it somehow, and we made it to the high school along with all the graduates and their families. Many thanks to the great volunteers who kept things moving.

Hillene was involved in something at the church one night that involved formal attire. She was all gussied up in a fancy taffeta dress, but made the mistake of getting dressed at home instead of waiting until she got to the church. Needless to say, the back of the dress was soaked by the time she got to the church. You know what happens to taffeta when it gets wet.

Of course, water is always an attractive nuisance to anyone under the age of eighteen. Kids will be kids and I doubt if anyone in that age group on either side of the “lakes” could resist putting at least a toe into the water. My friends and I had our share of fun playing around.

As is the case much of the time, fun can have consequences. Ours came in the form of a Health Unit nurse and a needle. After the waters receded all who had cavorted in floodwaters were ordered to report to the temporary Health Unit facility for mandatory tetanus shots. I don’t know about tetanus shots now, but in 1953 they were painful going in, and the next day the arm was on fire for the duration.

This was bad for a soda-fountain engineer like me. We had a customer who came to the drug store once a week. He always ordered the same thing—a quart of chocolate and a quart of strawberry, please. Hand-packed, please. It was not a matter of reaching in and pulling out two quarts of ice cream. No, we had to take a scoop and fill an empty quart carton to the brim with hard-frozen ice cream from the large containers in the freezer. It had to be packed down until we couldn’t get another teaspoon in before capping it. My co-worker and I were never overjoyed to see Handpacker Man walk through the door.

My friend and classmate, Phillip, spent his off time during the flood shooting snakes. He was part of a group of men and boys I’ll call the Viper Patrol. They rode around with their gun of choice—shotgun, rifle, or pistol. As the rivers and bayous rose, so did the slithery little apods. Thank you to the Viper Patrol–they kept us safe.

We’ve had our share of scary times—hurricanes, ice storms, explosions. The Flood of ’53 demonstrated how people can come together in times of crises, and emerge on the other side stronger and more committed to one another. I hope, here in the 21st Century, we haven’t lost that part of our humanity.

From The Bayou To The Big League: The Odyssey Of … END_OF_DOCUMENT_TOKEN_TO_BE_REPLACED

Update Update on From the Bayou to the Big … END_OF_DOCUMENT_TOKEN_TO_BE_REPLACED

A quick update on my dad's book. I'm nearly … END_OF_DOCUMENT_TOKEN_TO_BE_REPLACED

I'm coming along on schedule with From the Bayou … END_OF_DOCUMENT_TOKEN_TO_BE_REPLACED