Little did Sidonie know that the first time she disobeyed her parents would be her last day as a human. Denny and his bright ideas. If only she could turn the clock back. Should have listened to the old folks, she thought, frowning down at her arms and hands.

“You better be good, Donie. The loup-garou, he gonna get you.” That’s what Grandmere Mathilde used to tell Sidonie when the moon was full, like tonight. Sidonie stood at her bedroom window and watched as the huge orb cleared the cypresses, its reflection shimmering in the black, rippling water of the swamp. Biggest and brightest of the year, the guy on TV said.

Inside the house the spicy aroma of the gumbo they had for supper hung in the air. Sidonie’s favorite. Shrimp and okra. From her parents’ room next door she heard the canned laughter of their favorite sit-com, the sound muted by a separating wall. She hoped they would be asleep soon. She looked again at the moon and remembered the first time she heard about the loup-garou when she sat on her grandparents’ porch after supper one night when she was five. She and three of her cousins sat cross-legged on the weathered planks, listening to the old folks talk.

Tante Agathe folded the yellow shawl she was crocheting. “You petits watch out when the moon be full. Loup-garous is them that wants to do bad things. They’s people who change into wolves when that big moon get into the sky.” She stuffed the shawl and yarn into a canvas bag beside her rocker.

“An’ they got long pointy nails an’ hair all over an’ big red eyes,” said Grandpere Leon. He sat in front of the open door so he could continue whittling, using the light spilling onto the darkened porch.

“But they scared of frogs. If you see one of them loup-garou you just toss a big ole bullfrog at him. That loup-garou, he gon’ run, him,” Nonc Pierre said, rocking and puffing on his old corn-cob pipe.

That right,” said Grandpere Leon . “That the only way to chase one away. Bullets jus’ go right tru’ that hairy critter.” He held up a little wooden object he’d been whittling. “Live frogs is best, but you can scare him off with one of these.” A perfectly formed little wooden frog rested in his palm

“But if you get bit, you a lost soul. You be dancing at their balls on the Bayou Goula ’cause you be one of them.” Nonc Pierre said, as he got up and knocked his pipe against the porch post, dumping the tobacco into the St. Augustine grass surrounding the steps.

“Yeah, an’ if all you little marmaille don’ be good that loup-garou he gonna get you, too,” Tante Agathe said as she picked up her bag and disappeared into the kitchen to help Grandmere Mathilde with the coffee.

Sidonie didn’t think she and her cousins had been acting up. She didn’t like being called bratty, but she knew her Tante Agathe didn’t have any kids, so she thought all of them were brats. Sidonie jumped up and ran over to her grandfather’s rocker. “Papa Leon, can I have the frog so the loup-garou won’t get me?” she asked.

Sidonie and her cousins were grown now. Well, nearly. Sidonie would be graduating high school this year. But they all laughed now any time there was talk of the loup-garou. However, she still slept with her wooden frog under her pillow. Her brother, Guy, had drilled a small in the frog’s backside so she could loop a cord through it and wear it around her neck. She never worried about it during the day. The old folks said the loup-garou only came out at night and only when the moon was full. After the sun went down her frog was her constant companion until she started high school.

Sidonie lived with her parents in a little house on the edge of the swamp. She still slept in the same small bedroom facing the back yard. She grew up with the swamp and its towering cypresses and Spanish moss brushing the black silky water. To Sidonie it was beautiful by day and she delighted in taking her father’s pirogue out exploring when she was growing up. But at night it took on a sinister air. Especially when the moon was full.

She would stand at her window holding her wooden frog, rubbing its smooth brown surface. As long as she had her frog she knew she had nothing to fear. Isn’t that what Grandpere told her all those years ago? Of course, she would never, ever venture outside on those nights.

However, she had been a kid then. Now she knew it was just something the old folks told them to keep them in line. Wasn’t it? She could still hear Grandmere Mathilde. “You better be good or the loup-garou he gonna get you.” Well, what would her grandmother say if she knew what Sidonie was up to tonight? Being good’s not in the equation, that’s for sure, she thought.

She pulled the tiny folded square out of her pocket. “Candylegs” was scrawled across the front. Candylegs was Denny’s nickname for her. He only used it in private. No one else had ever heard it. He handed her the note just before she got on her bus after school. She read over it for the sixth time. 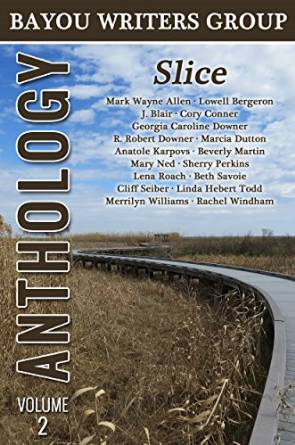 “Mom and Dad have some political meetin tonight so no one home but me and old lady Bertrand. She’s haf def and watches TV in her room at night, so she won’t hear nothing. Come to the back door and we can sneak up to my room. I’ll be home at six. Can’t wait. Love ya. Denny-boy.”

She smiled and tucked the note back into her jeans pocket. She looked forward to putting something over on his snooty parents tonight. They wanted more for their son than a shrimper’s daughter. They didn’t know she had no intention of anything permanent with Denny. Good enough for a prom date. Dances after football games. Saturday night movies. Nothing more.

Sidonie had plans. She had signed a track scholarship with Tulane last week and dreamed of going to the Olympics someday. In the meantime, she would study pre-law and attend law school at Tulane. Then, when her track career was over, she would apply to the FBI. She didn’t think Denny would be able to keep up with her. He had no idea what he wanted to do past playing wide receiver for LSU. Besides, Sidonie didn’t want to spend the rest of her life calling Mrs. Guidry “Mom.”

She looked out the window again. By now the moon cleared the tops of the trees, giving off an eerie illumination in the swamp. Night creatures were out, joining in the familiar concert. She squinted, searching for some sign of movement in the darkness. Nothing She looked at her clock. Seven-thirty-seven. She listened for the muted sound of the television in her parents’ bedroom. Her father was no doubt already snoring. He had to get up at four-o’clock. I better go now so I can get back home before he wakes up.

** To read the rest of the story and find out what happens to Sidonie check out the Bayou Writers Group Anthology, Volume 2, titled Slice. It’s available in paperback and as an e-book on amazon.com. “Sidonie and the Loup-Garou” is found on page 67. I also have a poem in it, “When Kings Go Forth,” on page 14.

From The Bayou To The Big League: The Odyssey Of … END_OF_DOCUMENT_TOKEN_TO_BE_REPLACED

Update Update on From the Bayou to the Big … END_OF_DOCUMENT_TOKEN_TO_BE_REPLACED

A quick update on my dad's book. I'm nearly … END_OF_DOCUMENT_TOKEN_TO_BE_REPLACED

I'm coming along on schedule with From the Bayou … END_OF_DOCUMENT_TOKEN_TO_BE_REPLACED