Poor Macbeth. He starts out a war hero. By the time Act V rolls around he’s missing his head. Sometimes ambition can be deadly. Of course, that wife of his didn’t help. She was a piece of work. And those three witches—they started the whole mess.

Now I’m not a Shakespearean scholar, but I have read a few of his plays over the years. Macbeth is the one that stands out—mainly because it’s the first time I ever read the Bard. The Class of ’54 were the big dogs at Westlake High. Seniors. Ready to launch. Look out , World—here we come.

We had a brand new English teacher—Mrs. Crick. She shared English classes with our long-time home room teacher, Mrs. Clark. At the beginning of the six weeks—don’t remember which one—Mrs. Crick announced to her class, of which I was a member, that we would be reading and studying “Macbeth” by one William Shakespeare.

Not only would we be reading and studying, we would also be reading out loud. Each of us would have a part for which we were responsible. Some might even have more than one part since there were more roles than students in our class. Not only that, there were only four boys in the class. Oh well. In Shakespeare’s time all roles, including female roles, were played by men. What’s sauce for the goose is sauce for the gander. We girls could handle the guys’ parts, no problem. 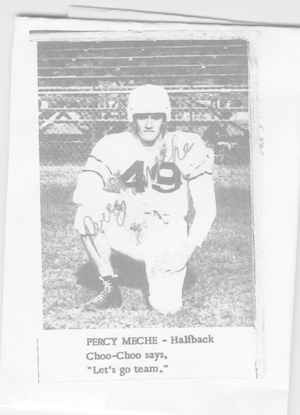 Now 1954 was quite a few years ago—sixty-three to be exact, and this old brain doesn’t remember everything. I don’t quite remember which part (or parts) I had been assigned, but I think I may have been one of the witches. Seems like I remember saying “All hail, Macbeth!. Hail to thee, thane of Glamis!” The only person I remember, and who I’ll always remember, is Percy Meche, who read the part of Macbeth.

Why would I remember him and no one else? We all sounded rather peculiar with our southern accents trying to wrap our tongues around 15th Century words. I remember Percy because here’s the main character in the play belting out his lines in a Cajun accent.

It starts off easy enough. Macbeth’s first line was “So foul and fair a day I have not seen.” No hill for a climber. However, take a gander at Macbeth’s last speech.

“I will not yield

To kiss the ground before young Malcolm’s feet.

And to be baited with the rabble’s curse.

Though Birnam wood be come to Dunsinane,

And though opposed, being of no woman born,

Yet I will try the last. Before my body

I throw my warlike shield. Lay on, Macduff,

And damn’d be him that first cries “Hold, enough!’ ”

I ‘m not going to try to write the whole thing in Cajun dialect but I’ll give line three a try. “An’ to be bait wit’ de rabble cuss.” You get the idea.

Percy is no longer with us. His nickname was Choo-Choo and he was a first-class running back on the 1953 State Champion Rams (football). And for six-weeks in 1954 he was the King of Scotland.

From The Bayou To The Big League: The Odyssey Of … END_OF_DOCUMENT_TOKEN_TO_BE_REPLACED

Update Update on From the Bayou to the Big … END_OF_DOCUMENT_TOKEN_TO_BE_REPLACED

A quick update on my dad's book. I'm nearly … END_OF_DOCUMENT_TOKEN_TO_BE_REPLACED

I'm coming along on schedule with From the Bayou … END_OF_DOCUMENT_TOKEN_TO_BE_REPLACED