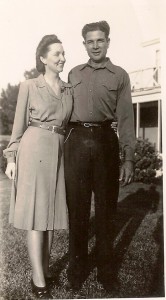 The phone rang in the Bostick house and my granddaddy answered. “Bobbie? There’s no one here by that name.”

My mother ran into the room. “It’s for me. It’s for me,” she said, and took the phone out of his hand. “Oh, that was my father,” she continued into the phone. “He was just kidding around.”

Now I don’t know if that’s how it really went down, because I wasn’t around when it happened. I wasn’t even born yet. My mother was in Junior High at Central School in Lake Charles, but we heard that story many times as we were growing up.

Her real name was Nannie Locke Bostick and everyone in her family called her Nannie Locke. When she started school at Central she told them her name was Bobbie Bostick. She went through school and her life in Louisiana as Bobbie. My dad called her Bob until the day he died. To her family at home and relatives in her native Texas she was Nannie Locke—always with the middle name.

She never held a job outside the home, so I suppose the gals in the power suits of today would bemoan her fate. However, she did earn some money for one day’s work.

When Daddy was playing for the San Diego Padres, he and his teammates got to be friends with Joe E. Brown, the actor, who came to every home game. Brown made a movie—”Alibi Ike”—and wanted the Padres to be extras, since it was about baseball. They also needed some extras for shots of the stands, so they hired a few of the wives for a day. Mama and her friend, Fay, were two of them. They were paid the standard wage for extras and given a nice lunch.

My mother was always there for us and woe betide anyone who did anything to one of us. She hauled us to ball games and school dances, worked as a room mother, helped out at school plays and such. She worked as hard as any power suit today. Have you ever ironed a cotton four-yard skirt?

Ask anyone who ever had the privilege of eating one of her blackberry cobblers or mince meat pie or cherry pie if they ever forgot it. They’ll all say no. We tried our best to duplicate it, but she didn’t use a recipe and none of us—my sister or my sisters-in-law—ever got the hang of it.

So here’s to a remarkable lady. She reared five kids who turned out okay and who still miss her, especially at Christmastime and the mince meat pie.

My sister, Hillene, has a new nickname thanks to Nannie/Bobbie. Hillene was in charge of medications as Mama aged, and is now known as the Pill Nazi.

From The Bayou To The Big League: The Odyssey Of … END_OF_DOCUMENT_TOKEN_TO_BE_REPLACED

Update Update on From the Bayou to the Big … END_OF_DOCUMENT_TOKEN_TO_BE_REPLACED

A quick update on my dad's book. I'm nearly … END_OF_DOCUMENT_TOKEN_TO_BE_REPLACED

I'm coming along on schedule with From the Bayou … END_OF_DOCUMENT_TOKEN_TO_BE_REPLACED