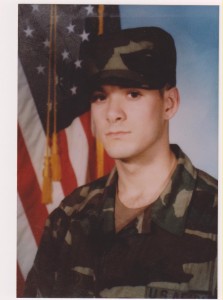 In late 1990 my son was about to wrap up the fall semester at McNeese. In addition to being a student he was also in the Louisiana National Guard. Iraq invaded Kuwait and the powers that be in Washington decided an invasion was called for, so they called up the entire Louisiana Guard and sent them off to Fort Hood for training. They didn’t get to finish out the semester, but some of the teachers let them take their finals so they wouldn’t lose the whole semester. Following are my thoughts.

The scene is a microcosm of one being played out across America today. The large buses are parked in the driveway with the motors running. The front yard of the armory is like a stirred anthill. Young men in fatigues stand around, some individually in the midst of assorted civilian clusters and some in small groups talking among themselves. The mood among the soldiers seems to be one of cautious anticipation—almost elation as they think about the grand adventure they’re about to embark upon. You can see it in their eyes and hear it in the boisterousness of their interaction with each other.

The mood of the civilians, on the other hand, is somber. The eyes of the younger women, many carrying babies or toddlers, are red and swollen. Some of the middle-aged and older women seem to be fighting back tears while others wear no expression. None are smiling. The Captain and First Sergeant are moving from group to group, clipboards in hand, speaking to first one, then the other.

The National Guard has been activated for possible deployment to the Persian Gulf. This is a combat unit trained to fire TOW missiles at enemy tanks, so everyone there is well aware that if the war lasts long enough these fresh-faced twenty-year-olds will be in the thick of the hostilities. Some may come home in flag-draped coffins; the rest will come home, but some may leave a part of themselves in the Iraqi desert. None of them will ever be the same again. They will have lost that last great hope of childhood—that certainty, possessed by all youth that they’re going to live forever. War will brutally snatch it away. I’m angry with those who are doing this to them—those old men in Washington.

It’s time to load up, they say. One last round of hugs and kisses. My eyes are dry, but an unbearable heaviness falls over me like a net. I watch him disappear into the bus and my heart clenches in my chest. Then his head pops out of a window, and he’s grinning and waving. I wave back and try to smile.

I watch the empty road long after the bus has disappeared around the bend. I think back to the sixties when the Vietnam War was served up to America on the evening news at suppertime. I remember the endless rows of white stones at Arlington Cemetery. I see the granite wall covered with the names of a generation of young men who will never hold their babies or watch their children graduate or father a child who may have grown up to rid the world of cancer.

The anger that wells up in me will remain with me forever, and I find myself unable to comprehend the utter stupidity and arrogance of our leaders as they take us from one “grand adventure” to another.

Here’s what I think: put mothers in charge of this old world and there will be no more war.

From The Bayou To The Big League: The Odyssey Of … END_OF_DOCUMENT_TOKEN_TO_BE_REPLACED

Update Update on From the Bayou to the Big … END_OF_DOCUMENT_TOKEN_TO_BE_REPLACED

A quick update on my dad's book. I'm nearly … END_OF_DOCUMENT_TOKEN_TO_BE_REPLACED

I'm coming along on schedule with From the Bayou … END_OF_DOCUMENT_TOKEN_TO_BE_REPLACED