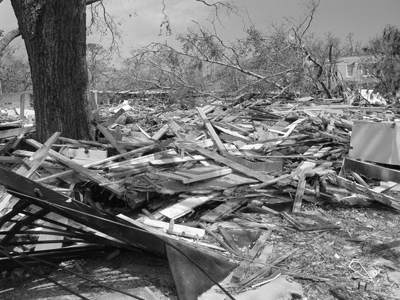 I called my mother from work that day. The news reports coming out of Cameron were not good. Authorities were counting survivors, they said, instead of victims. I asked her if anyone had heard from Uncle Charley, my dad’s brother, who lived there. No one had heard anything, she told me, since telephone lines were down in Cameron. My parents got ready to go to my grandmother’s house in Lake Charles to await word.

We had ridden the storm out at home, opting not to go to a shelter, and my parents, who lived next door to us in a house built to withstand tornadoes, had stayed put also. Jack and I were in a trailer, but it stayed upright because the wind had come from the east first and then from the west after the eye passed through. The trailer’s narrow ends faced east and west. Had it been hit broadside the outcome would have been different.

My most vivid memory of that day, June 27, was the catawba tree in our back yard. The wind had lost some velocity by the time it got to our area, but it was still strong enough to uproot the tree. All of a sudden the wind calmed—no roar, nothing stirring. Just eerie silence. That’s when Jack decided to go down to the river to see what it looked like. Not the smartest thing he ever did. He barely made it back when the wind started up again, stronger than before from the other direction. We stood at the window and watched it pick up the prone tree, stand it upright, and blow it the other way until it was once again stretched out on the ground. Of course, we were without electricity and water. We ceased our griping, however, when the news started filtering out of Cameron Parish.

Cameron residents had gone to bed the night of June 26 thinking they had until the next morning to evacuate. My dad’s cousin, Burton Daigle, and his wife were among the Cameron residents who waited until the next morning. On rising and starting to prepare for evacuation his wife looked out the window. “Burton, isn’t that the Gulf in our yard?” she said. It was, indeed, and by 4:00 a.m. the water was already over the escape route, Louisiana 82. Those who had not left the day before were trapped.

Over 500 residents of the sparsely populated area were unaccounted for. Whole families had gone down together. Some took refuge on the roofs of their floating houses, beating off water moccasins trying to find refuge also. No one had heard anything from my father’s brother, Charley, and his family—wife, two children, and a visiting niece. I had to work that day and Jack, who was stationed at Chennault, also had to report for duty. The rest of my paternal relatives gathered at my grandmother’s house to wait.

It was an agonizing two days but they finally got the phone call they were almost afraid to take. Everyone was safe. They had gone to the attic when the house began to move off its foundation. The house was sturdy enough that it stayed intact even though it was pushed a hundred yards or so from the cement foundation. It wasn’t a fun two days, Uncle Charley said, but at least they were alive, and they were thankful for that when they heard what had happened to so many of their friends and neighbors.

Many years later, after a hurricane watch had been lifted from our area, a young man from Oregon said he was kind of disappointed. He had wanted to see what being in a hurricane was like. I looked at him a minute or two.

Riding Out the Hurricane

From The Bayou To The Big League: The Odyssey Of … END_OF_DOCUMENT_TOKEN_TO_BE_REPLACED

Update Update on From the Bayou to the Big … END_OF_DOCUMENT_TOKEN_TO_BE_REPLACED

A quick update on my dad's book. I'm nearly … END_OF_DOCUMENT_TOKEN_TO_BE_REPLACED

I'm coming along on schedule with From the Bayou … END_OF_DOCUMENT_TOKEN_TO_BE_REPLACED