Alexander Graham Bell invented the telephone in 1876, so it’s been around quite a while. However, it didn’t make its way to those of us living outside the town limits of Westlake until much later. I assume there was telephone service in town, but I can’t be sure, and there’s no one around that I can ask. All I know is there was none when we moved there in the early 1940’s. 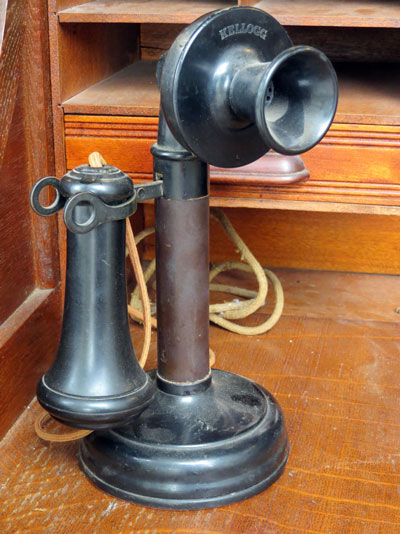 I guess that’s another question a Gen-Xer would ask. “How in the world did you keep in touch?” Well, we just had to wait for a face-to-face. Or a letter. Or a note from the teacher.

I remember how excited the grown-ups in the house were when the poles started going up in the neighborhood. Even more excitement when the lines were connected. Then we had to sit down and get instructions.

Since we were so far out, there was no such thing as a private line. We shared a line with seven other households. That meant we couldn’t tie up the phone for long periods of time. And if you think everyone followed that rule, I have some beachfront property in Arizona to sell you.

The other thing we had to be aware of was the ring. Our phone rang with another on our party line. I think ours rang with the Franklins, our nearest neighbors. Our ring was one long one. Theirs was two short ones. So if we heard two short rings we weren’t supposed to pick up. And vice versa. I’m sure you know how well that went.

With eight families using the same line, everyone knew everyone else’s business. Sometimes there would be three or four people carrying on a conversation. However, if someone broke in with an emergency, whoever was using the phone got off immediately, but not before asking if there was anything they could do to help.

Did people fib about an emergency? Sure. Sometimes. But the good outweighed the bad, and we were glad to be connected with other folks.

The telephone has come a long way since 1876, and can be a blessing and a curse. Most of the time it’s an unwanted call asking for money or votes or some other annoying solicitation. But sometimes it’s a loved one’s voice on the other end—and that’s worth waiting all day for.

From The Bayou To The Big League: The Odyssey Of … END_OF_DOCUMENT_TOKEN_TO_BE_REPLACED

Update Update on From the Bayou to the Big … END_OF_DOCUMENT_TOKEN_TO_BE_REPLACED

A quick update on my dad's book. I'm nearly … END_OF_DOCUMENT_TOKEN_TO_BE_REPLACED

I'm coming along on schedule with From the Bayou … END_OF_DOCUMENT_TOKEN_TO_BE_REPLACED