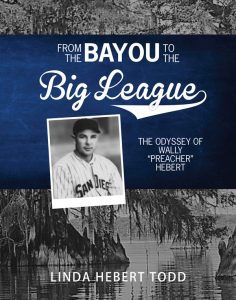 From The Bayou To The Big League: The Odyssey Of Wally “Preacher” Hebert is finally published. It’s live on Amazon for $19.95, and I will be selling them for $20.00. It’s the story of my father’s professional baseball career as well as memories of his early life and  later years. It’s been two years in the making, and I’m finally able to get back to the blog I’ve been neglecting. Here’s the back cover blurb from the book. If you enjoy baseball history you might be interested.

The young skier laughed as the spray from his water skis washed over the old man sitting in the bass boat. He signaled the driver to make another pass at the fisherman, who was wringing out his camo baseball cap before returning it to his head, now plastered with sodden salt-and-pepper strands of hair. The young man was having fun at the old guy’s expense. This would be his third pass at the geezer. The ski boat banked and made the turn, heading straight for the green metal fishing boat. Just as the skier turned for a third drenching the old man stood, his fishing rod gripped in both hands. The rod caught the skier squarely on the stomach, and he soared into the lake, losing both skis.

Neither the driver of the boat nor the skier saw the fisherman paddle toward shore. The young men would have been surprised had they known the old man’s history. Perhaps they wouldn’t have been so quick to take him on. He spent fourteen years—from 1930 until 1943—in professional baseball. He knew how to swing a bat. And he struck out Babe Ruth.

From the bayous of southwest Louisiana to the baseball cities of St. Louis, Hollywood, San Diego, and Pittsburgh, this is an account of the life of Wally “Preacher” Hebert, a curly-headed left-handed pitcher whose life stories prove that truth is usually stranger than fiction.

From The Bayou To The Big League: The Odyssey Of … END_OF_DOCUMENT_TOKEN_TO_BE_REPLACED

Update Update on From the Bayou to the Big … END_OF_DOCUMENT_TOKEN_TO_BE_REPLACED

A quick update on my dad's book. I'm nearly … END_OF_DOCUMENT_TOKEN_TO_BE_REPLACED

I'm coming along on schedule with From the Bayou … END_OF_DOCUMENT_TOKEN_TO_BE_REPLACED