Wally Hebert was on the mound with an eight-run lead. Everything seemed to be going his way. He was in the zone, tossing strikes and forcing infield flies, and generally making life miserable for the hapless Angels.

Baseball season was starting in on its third month. I was a lonely five-year-old only child who amused herself with two imaginary playmates named Lavory and McGuvney. But not for long. I would soon have a baby sister or brother. My mother, whom everyone called Bobbie, had a little time left before the new baby was expected to arrive, but everything was ready. 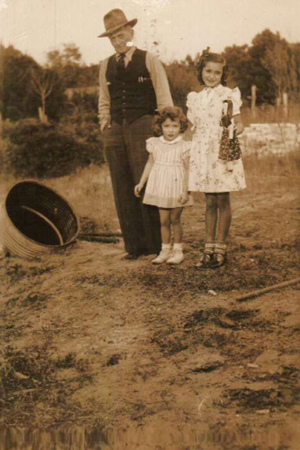 Back to the ball park. My dad was on the mound systematically sending the Angels’ batters back to the dugout in high dudgeon. Word came to the press box and the Padre manager that my mother had given birth to their second child. The manager, Cedric Durst, knowing how laid back my dad usually was, sent word to the press box to share the good news over the public address system and radio.

“Attention everyone. We have just received word that opposing pitcher Wally Hebert has become a father for the second time. His wife, Bobbie, gave birth in San Diego to a boy. Mother and baby are doing fine. Congratulations to Mr. and Mrs. Hebert.”

Applause broke out all over the stadium in spite of the home team’s woes at the hands of the enemy. His teammates were cheering and it took a while for everyone to settle down and get back to the game. However, the normally unflappable Cajun never did settle down. No more strikeouts. No more infield flies. Angel bats came to life and the eight-run lead faded away. Manager Durst had to take Hebert out, and Los
Angeles chalked one up in the win column.

Knowing my dad, I’m sure that loss didn’t bother him. He was glad everybody was okay even if someone somewhere along the line got their facts wrong that day. I became big sister to Mary Hillene Hebert that June Sunday afternoon San Diego. I didn’t get a brother till a few years later.

Sorry, Hillene. Now anyone who takes the time to do the math can find out how old you and I are.

From The Bayou To The Big League: The Odyssey Of … END_OF_DOCUMENT_TOKEN_TO_BE_REPLACED

Update Update on From the Bayou to the Big … END_OF_DOCUMENT_TOKEN_TO_BE_REPLACED

A quick update on my dad's book. I'm nearly … END_OF_DOCUMENT_TOKEN_TO_BE_REPLACED

I'm coming along on schedule with From the Bayou … END_OF_DOCUMENT_TOKEN_TO_BE_REPLACED