Back in the day, when Westwood Road (now Sampson Street) was still two lanes and probably dirt or shell, there was a country store on the corner now occupied by Burger King. Rue’s Store was family owned and run by its sole proprietor, A.A. Rue. Someone from our family was in there two or three times a week.

One day we were out of bread, as usual, and when my grandmother noticed this, it was ten minutes from closing time at Rue’s. At that time there were no convenience stores in Westlake. Rue’s was the only game in town, and if we were to get toast for breakfast and our dad to get sandwiches in his lunchbox, somebody had ten minutes to make it the three miles before the store closed.

Grandma hotfooted it out to the car and my then four-year-old brother, Wally, decided he wanted to go, so she hoisted him into the car and took off—no seat belts back then, folks. She got to John Stine Road, the town limits, and barreled into Westlake. 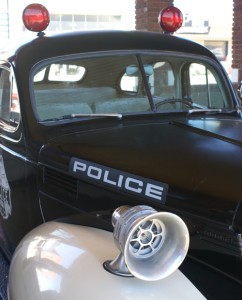 So intent was she on getting to the store before it closed that she didn’t hear the siren or see the flashing lights that chased her all the way down Westwood Road to the store. She pulled into the parking lot and jumped out, followed by Wally. The policeman pulled in right behind them.

“Hey lady. Why didn’t you stop? You were way over the speed limit,” he shouted.

Without breaking stride, she yelled back. “I had to get here before it closed. We’re out of bread.” She pushed through the door with minutes to spare.

Mr. Rue met the officer at the door and told him to leave Mrs. Bostick alone—that she was there to buy food for her family. Not wanting to anger the man who everyone in town depended on for food, the policeman left, and Grandma stayed out of the clutches of the law—and we had toast for breakfast the next morning.

Some years later, after Wally got his driver’s license, our mother sent him down to the store and told him to get a stalk of celery. Being an obedient son, he did exactly what she told him to do—he pulled a stalk off the bunch and went up to pay for it. Mr. Rue sent him back to get the rest of it. Only in a small town. Sometimes I miss that.

From The Bayou To The Big League: The Odyssey Of … END_OF_DOCUMENT_TOKEN_TO_BE_REPLACED

Update Update on From the Bayou to the Big … END_OF_DOCUMENT_TOKEN_TO_BE_REPLACED

A quick update on my dad's book. I'm nearly … END_OF_DOCUMENT_TOKEN_TO_BE_REPLACED

I'm coming along on schedule with From the Bayou … END_OF_DOCUMENT_TOKEN_TO_BE_REPLACED