Update on From the Bayou to the Big League:I have two more baseball years to finish—1939 and 1940. I’m halfway through with 1939. I hope to have the first draft finished by Christmas. Then the revision begins. Here’s an account of a game in the 1939 season.

Oakland was in San Diego for the start of a nine-game series against the Padres. They had made up their minds they could win at least six of those games. After the first game of Tuesday’s double bill they felt more confident than ever. At the end of a game lasting an interminable two hours and twenty-two minutes they had eked out a closely- fought 8-6 victory. Ten of those minutes were taken up by a sixth-inning brouhaha that finally ended with young Padre first-baseman George McDonald being asked none too politely to leave the field by umpire Wally Hood.

Oakland bats sent two San Diego pitchers to the showers. All of this was enough to get the home team’s collective back up, and egged on by the raucous cheering squad in the stands they vowed vengeance on the visitors later in the nightcap.

The Oaks swaggered into the dugout, ready to shellack the border city boys a second time. They watched the home team take the field and start tossing the ball around, yelling and slapping their gloves. Not demoralized at all, it would seem. Wally Hebert stepped on the mound and took his practice throws. The same Wally Hebert with eight notches on his victory belt. Hmm. Might not be so easy after all, the visitors thought. Turns out they had reason to worry. 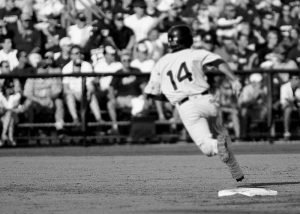 Hebert was in complete control of Oakland at the plate. He scattered four hits among four innings, and the visitors were unable to capitalize on them—zeroes across the board in the run column.

While Hebert had silenced Oakland bats, San Diego’s came alive enough to give the Padres three runs on six hits to take the contest 3-0. Not only did he do his part on the mound, he was also involved in the two times the Padres put runs up. In the third inning catcher Bill Starr doubled and Hebert belted a single. A bad throw by Oakland’s center-fielder resulted in Starr crossing the plate. 1-0.

After an uneventful fourth inning the Padres struck again. Hebert drew a walk and became a base runner. George McDonald smashed a triple, scoring Hebert. Bunny Griffiths laid down a perfect bunt and McDonald scored for the second run. 3-0. One more inning to go in the short nightcap. The gentleman from the bayou applied the finishing touches and retired the side. Oakland defeat brought Hebert’s record to nine victories and two defeats with a percentage of .818. This put him in second place among Pacific Coast hurlers. He who laughs last laughs best.

From The Bayou To The Big League: The Odyssey Of … END_OF_DOCUMENT_TOKEN_TO_BE_REPLACED

Update Update on From the Bayou to the Big … END_OF_DOCUMENT_TOKEN_TO_BE_REPLACED

A quick update on my dad's book. I'm nearly … END_OF_DOCUMENT_TOKEN_TO_BE_REPLACED

I'm coming along on schedule with From the Bayou … END_OF_DOCUMENT_TOKEN_TO_BE_REPLACED