Let’s go back to the early fifties in the fall of the year. Stadium lights blazed out all over the country—especially in the South. Young warriors would take the field to see who could score the most points. Pep squad and cheerleaders would egg them on with chants of Kill. Kill. Blood makes the grass grow. The band filled the night with fight songs. And of course we opened with a prayer for safety, followed by “The Star-Spangled Banner.”

Football in a small town is like nothing you’ve ever seen. Everyone in town had a kid that did something at the stadium, so every parent in town was in the bleachers. Everybody’s younger siblings were running around under the bleachers.

We had two coaches—head coach Ellender and assistant coach Benson. Coach Ellender was always on the sideline with his trusty clipboard, which was slightly scarred up from hitting the ground so often. Coach Benson was often not on the sideline. He was usually scouting our opponent for the next week. No films to study. No communicating devices to make things easier. In spite of everything, they managed a state championship in 1953. 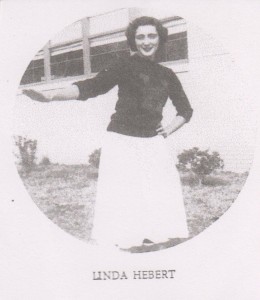 A cheerleader then was quite different from those of today. No acrobatics or pyramids. We led the Pep Squad and small student section in yells. We ran up and down the sidelines screaming. If we still had a voice Saturday morning, we had fallen down on the job.

We decorated the goal posts with orange and black crepe paper—streamers that fluttered in the wind were tied on the cross-bar. We ran ahead of the players when they took the field, and we knew we had to run at least as fast as they did or get run over.

Our uniforms were different, also. No short skirts. We had long full skirts made of white wool—it was cooler back then in the fall. Our sweaters were black wool, purchased from the Navy. We had a big orange “W” with “Cheerleader” written across it. Our shoes were black and white saddle Oxfords with white sox. The skirts were lined with black satin and we wore black satin tights underneath, which we would flash from time to time. We didn’t use pom-poms and we only had one megaphone.

I don’t remember many of the yells—it has been sixty-one years, you know. Here’s one:

I remember those Friday nights. Running out on the field. Walking our main guy to the field house or the bus. Congratulating or consoling, depending on the score. Loading up the cars and dragging Ryan Street in Lake Charles after the game. Circling the parking lot at Tom and Mac’s, taunting our vanquished foes.

So here’s to everyone who made those nights memorable. And when the lights went on all over the country, I’m sure the life forms on Mars saw them and said, “Here they go again.”

From The Bayou To The Big League: The Odyssey Of … END_OF_DOCUMENT_TOKEN_TO_BE_REPLACED

Update Update on From the Bayou to the Big … END_OF_DOCUMENT_TOKEN_TO_BE_REPLACED

A quick update on my dad's book. I'm nearly … END_OF_DOCUMENT_TOKEN_TO_BE_REPLACED

I'm coming along on schedule with From the Bayou … END_OF_DOCUMENT_TOKEN_TO_BE_REPLACED