I’ve always had a vivid imagination—ever since I can remember. The first five years of my life I was an only child so I had to amuse myself much of the time. I had two imaginary playmates named Lavory and McGuvney. I’m sure anyone who saw me walking around talking to the air thought I had a screw loose. No. I was perfectly lucid. I was either talking to my friends seen only by me or I was making up dialog. 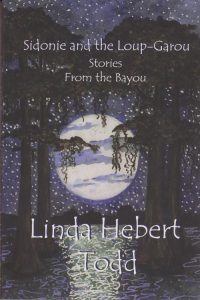 I started writing stories when I got to Junior High. Silly teenage fluff. Stock characters. No setting. Worst of all—NO CONFLICT. My writing sat on a back burner through the sixties and seventies while I followed my Air Force husband around and took care of five kids.

My husband died in 1985 and I went back to college. After getting a Masters degree in English I took every writing course that came along and read every book I could get my hands on about the writing process.

Last year I published my first novel—Wild Justice—which earned an Honorable Mention in the Writer’s Digest Self-Published Book Awards. Then my friend, Jessica Ferguson, suggested I put together a collection of the short fiction I had accumulated over the years. That book is now published. Sidonie and the Loup-Garou: Other Stories from the Bayou is live on Amazon in print and on the Kindle. One of the shorter pieces follows:

I remember the morning it happened like it was yesterday. Even though it made one of those supermarket tabloids, I knew it was the truth the minute I saw the headline. And how do I know this? My dad was the hunter who brought him down.

Dad and his hunting buddies were in the blind at 4:30, just before dawn. The unfortunate ducks appeared and the guys opened up with both barrels. Several birds fell from the sky and landed in the marsh. The dogs took off.

“Wow! Would you look at the size of that one going over right now,” my dad crowed, and took aim. It fell.

“That’s the weirdest looking duck I ever saw,” someone said.

“Yeah,” said another. “It’s too big for the dogs. We’ll have to get it ourselves.”

When they got to the fallen bird they found it wasn’t a duck at all. It was a man, kind of shiny, sitting on a log looking at his wing. The guys gawked. The shiny man scowled.

“Thanks a lot, guys. Should’ve known not to come to Louisiana during duck season,” he said. “No big deal, though. I need a little rest.”

My dad told me later the man looked like he’d been in a fight or something. He had a couple of splints on his wings. A big knot on his forehead. He was wearing a metallic blue jumpsuit and his wings were a dingy white covered with splotches of dried mud. He hadn’t fallen into the swamp, so the mud was from another place, another time.

“Where you headed?” my dad asked.

The shiny man got to his feet and pulled his wing around to inspect the damage. Three feathers were gone. He flapped it once. “I’ll still be able to fly. I’ve been in worse shape.” He turned to my dad. “I was on my way to St. Joseph’s Hospital. I’ve come to check on Dooley Diddlebeck. See if he needs an escort out of here.”

Understanding dawned on everyone’s faces. They all knew Dooley needed a full-time guardian angel. They also knew why this one looked like he’d been living under a bridge. Dooley would be a challenge for St. Peter himself.

That was ten years ago. Dooley’s still around. Sometimes, when the moon is full, we see what looks like a giant bird disappear into a cloud and come out on the other side—usually when Dooley takes another trip to St. Joe’s.

If you enjoyed this offering you might want to check out the others. There are twenty-seven stories in all. Some are short—flash fiction. Others are much longer. Some are funny. Some are sad. Some are scary. I no longer walk around talking to Lavory and McGuvney, but I still make up dialog—only now I give it to my characters.

From The Bayou To The Big League: The Odyssey Of … END_OF_DOCUMENT_TOKEN_TO_BE_REPLACED

Update Update on From the Bayou to the Big … END_OF_DOCUMENT_TOKEN_TO_BE_REPLACED

A quick update on my dad's book. I'm nearly … END_OF_DOCUMENT_TOKEN_TO_BE_REPLACED

I'm coming along on schedule with From the Bayou … END_OF_DOCUMENT_TOKEN_TO_BE_REPLACED