My husband, Jack, spent twenty years in the Air Force, and like the good little Air Force wife I was, I followed him from Chennault Air Base here in Lake Charles, to Goose Bay, Labrador, to Fayetteville, Arkansas, to Houston and back home to Westlake when his time was up. Being a Carolina boy who wasn’t a big fan of cold weather, southwest Louisiana was a fine place for him to retire.

We hadn’t been back long when a country/western singer named Jeanne Pruett released a song—”Satin Sheets”—in 1973. I was never a C/W fan but Jack was, so I heard the song quite often. It had a catchy tune and was easy to sing along with, and I started thinking about those satin sheets. I wondered what it would be like to lie on them.

As I listened to the lyrics I realized we had no business thinking about buying satin sheets. The song is about a girl married to a wealthy man, but is unhappy in spite of satin sheets, Cadillacs, and designer clothes. ( I can’t use any of the lyrics ver batim because the powers that be in the music industry are somewhat cranky about writers quoting lyrics.)

Anyway, as I said—no business buying satin sheets. We were far from rich. We bought muslin sheets—not even percale. However, Christmas came along and I got some money in the form of a present. I don’t remember how much the sheets were back then, but now they run forty to fifty dollars at Sears for a king-size set. I’m sure they weren’t quite that much then, but still more than our regular budget could stand, having five children to feed and clothe on a retired Air Force pension. 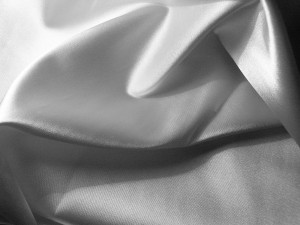 After the holidays were over and the kids back in school, I took myself off to Sears and came home with a beautiful king-size set of white satin sheets and two satin pillowcases. Getting the bed made was quite an adventure. The pillows slid off when I tried to put the blanket on. The blanket wouldn’t stay tucked under the mattress.

I finally got it done and topped it off with the chenille bedspread. Breathing like I’d been swimming laps, I beheld the result of my thirty-minute endeavor. The bed looked like the kids had been jumping on it. I brushed aside that niggling little voice whispering in my ear.

“Are you sure you want to do this?”

“Go away. It’ll be great,” and I left the bedroom for the kitchen to start supper.

My pillow was the first to go. It sailed out of bed and hit the bedside lamp, knocking it on its side, and the alarm clock landed on the floor. Later, I was nearly asleep, hanging on to my pillow like a shipwrecked sailor clutching his life raft, when some of Jack’s GI lingo drifted over to me. He retrieved his pillow off the floor, and with a few more choice non-euphemisms, held the pillow with one hand and the headboard with the other.

I woke up to the sound of something heavy hitting the floor, and also realized I was freezing. The blanket and bedspread were nowhere to be seen. My pillow was gone and Jack’s side of the bed was empty. No pillow there, either. Pretty soon his head appeared on the other side of the bed. How in the world does a grown man fall out of a king-size bed?

Finally, thankfully, the alarm went off. My pillow was gone again, but at least I was warm, wrapped in the bedspread as I was. Jack had commandeered the blanket. He threw it off and sat up on the side of the bed, head in hands. “Lord, what a night,” he said through his fingers.

The clerk in Customer Service at Sears eyed the refolded sheets in their plastic package with a knowing look. “And your reason for returning these?” she asked.

I said nothing—just returned her stare with my own bleary-eyed one. She nodded and wrote something on the package. I got the impression she had done this before.

Several years later I read an article in the Saturday Evening Post written by a woman who had a similar encounter with satin sheets. Sounded a lot like ours. The only difference—they didn’t take their set back. They kept them permanently on the bed in the guest bedroom. Hmm.

From The Bayou To The Big League: The Odyssey Of … END_OF_DOCUMENT_TOKEN_TO_BE_REPLACED

Update Update on From the Bayou to the Big … END_OF_DOCUMENT_TOKEN_TO_BE_REPLACED

A quick update on my dad's book. I'm nearly … END_OF_DOCUMENT_TOKEN_TO_BE_REPLACED

I'm coming along on schedule with From the Bayou … END_OF_DOCUMENT_TOKEN_TO_BE_REPLACED