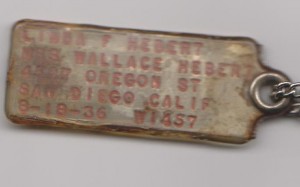 While we lived in San Diego during baseball season, mayhem was brewing in the Pacific. We had black shades on our windows. They had to be fully drawn at night. No lights allowed. The sprawling city with its giant naval installation was considered a high risk for attack by the Japanese.

I had no idea, of course, that anything as unpleasant as war was going on anywhere near. All I wanted to do was ride my tricycle down the high steps of the neighbor’s house or go to Tijuana and ride a donkey.

I remember when my mother’s cousin, who was in San Diego working at the naval base, came for supper one night. He said something big was going on out at sea because the ships coming in to the base were in bad shape, like they had been in combat. Turned out he was right. It was early June, 1942, and the Battle of Midway was going on. When that was over and we prevailed, the West Coast breathed a collective sigh of relief.

One of the things we had from the beginning were air raid drills and dog tags. All school children had dog tags with their name, parents’ name and address. We wore them on a chain inside our clothes, against our skin. I still remember that cold, clammy feeling where it touched my bare skin.

The sirens started their whine every morning at the same time—music class. We were probably singing “God Bless America” or “My Country Tis Of Thee.” We knew what to do even though we were only five. Our teacher herded us out of the classroom with its wall of windows into the hall where we would be safe from flying glass. We pulled our sweaters over our heads and sat cross-legged on the floor, waiting for the all-clear to sound.

My arms got tired and my feet went to sleep, but we had to wait. When the whistle finally blew we didn’t have to wait for the teacher to tell us it was time for recess. It always was after a drill. We uncovered our heads and ran outside with the others.
The sun was shining and it was time for dodge ball.

We never worried or wondered what would happen if the whistle didn’t blow.

From The Bayou To The Big League: The Odyssey Of … END_OF_DOCUMENT_TOKEN_TO_BE_REPLACED

Update Update on From the Bayou to the Big … END_OF_DOCUMENT_TOKEN_TO_BE_REPLACED

A quick update on my dad's book. I'm nearly … END_OF_DOCUMENT_TOKEN_TO_BE_REPLACED

I'm coming along on schedule with From the Bayou … END_OF_DOCUMENT_TOKEN_TO_BE_REPLACED