Back in 1953 Westlake had one drugstore. In fact, back then there was only one of anything. School. Theater. Hardware store. One room library. There might have been more than one grocery store. I’m kind of fuzzy on that, since the only one my family used was Rue’s store, but that’s another story.

Budge’s Drugstore was where I worked during the summer of 1953—my first job. It was located in what long-time residents call Old Westlake—on Miller Avenue next to the railroad tracks and across from the Lake Theater.

Senior year was coming up in September and I needed new clothes, so Mr. B. hired me to work a few hours during the week and every other Sunday afternoon. I don’t remember the exact number of hours I worked, but one week I took home around $10.00 and the next—the Sunday one—I received $13.00. I put it all away and by the end of August I had a tidy sum with enough to get a fine wardrobe to finish out my high school years.

In addition to the usual inventory, the drugstore boasted a soda fountain with stools along the counter and a few tables and chairs for customers. Mr. B. hired students from the high school to man the fountain. I guess you could say we were jerks once upon a time—soda jerks. 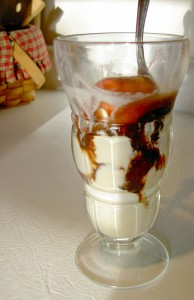 I learned the finer points of ice cream sodas, sundaes, and fountain drinks. My favorite thing to make was the banana split—mine and everybody else’s. A whole banana, split lengthwise. Three scoops of ice cream—vanilla, chocolate, and strawberry. Pineapple chunks and fresh strawberries on top. Whipped cream, chopped nuts, chocolate syrup, and maraschino cherries with stems.

The whipped cream was the real thing. It was in an aluminum or stainless steel contraption of some kind that we had to handle with care. The funniest sight I saw while I worked there was a young guy sitting at the counter with whipped cream in his hair and dripping off his nose when my co-worker accidentally set it off too early.

The drugstore is gone, as are most of the other businesses that made our town what it was. The main street of Westlake is Sampson Street, with all the businesses moving there. Once upon a time there was no Sampson Street in Westlake Louisiana. Once upon a time I remember a two-lane dirt road we called Westwood Road that went all the way to the river—the river of my dreams.

From The Bayou To The Big League: The Odyssey Of … END_OF_DOCUMENT_TOKEN_TO_BE_REPLACED

Update Update on From the Bayou to the Big … END_OF_DOCUMENT_TOKEN_TO_BE_REPLACED

A quick update on my dad's book. I'm nearly … END_OF_DOCUMENT_TOKEN_TO_BE_REPLACED

I'm coming along on schedule with From the Bayou … END_OF_DOCUMENT_TOKEN_TO_BE_REPLACED