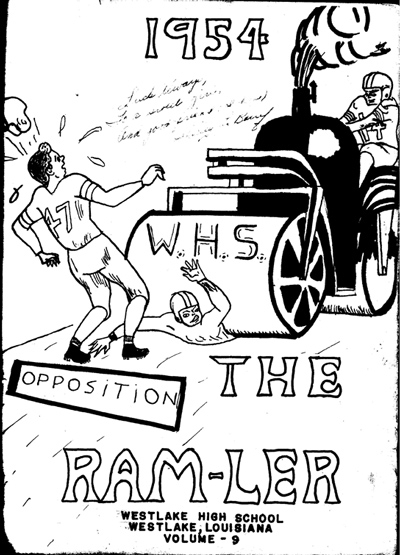 Football season is over, but there’s a group of guys I want to give a shout out to—the 1953 Westlake Ram football team. State champions. The best of the best in Class A. Cream of the crop. The pride of Westlake. It’s been over sixty years since a team brought home the gold.

A few years back a team came close, but missed it by one point. To paraphrase Shakespeare’s Richard III—”A kicker. A kicker. My kingdom for a kicker.”

Many a Friday night Coach Ellender would stalk the sidelines by himself because Coach Benson would be scouting the Rams opponent for the next week. No films to study back then.

The Rams had been picked by other coaches in District 6-A to win the title. The first game gave everyone a scare. Westlake squeaked by Ferriday with a score of 20-19.

They coasted along for the next four games, demolishing their unfortunate foes—Dequincy 48-0; Deridder 34-6; Vinton 34-6; Marion 34-14. Then they crossed the lake to take on LaGrange.

The Rams stayed with the Class AA Gators right up to the end. LaGrange pulled it out in the final minutes with a score of 26-21. The impressive Ram line held the Gator backs to a mere 97 yards on the ground while Westlake running backs gained 141 yards. LaGrange’s passing was what gave them the victory.

However, and it’s a big “however,” this writer will go to her grave believing Westlake really won that game for reasons I don’t intend to put on paper. If you see me on the street or at the post office, ask me and I’ll do my best to enlighten you.

The Rams cake-walked through the next three games. Opelousas 34-0; Landry 19-0; Leesville 40-7. Next stop Bi-district.

Morgan City wasn’t quite as easy as our district adversaries. They drew first blood and led 7-0 at the half. The Rams scored fourteen unanswered points in the second half and claimed victory 14-7. It’s been over sixty years since that game, and this old brain of mine remembers two things vividly.

It had come one of Louisiana’s gully-washers and everything in Morgan City was one big mud hole. We (the cheerleaders) couldn’t wear our white wool skirts, so we came up with a unique idea—blue jeans and our father’s white, long-sleeved dress shirts, which we tied in a knot just below the waist. Cute? We thought so.

The other thing I’ll never forget was the mother of all goal-line stands. Morgan City had the ball on the one-yard line and four downs to get it across. Piece of cake, right? Wrong. That immoveable object, the Ram defensive line, put the quietus on Morgan City’s hopes for further games. Next stop? Semi-finals and Gonzales.

For those of us who thought Morgan City was tough, we hadn’t seen anything yet. (Pardon the cliche.) It was an offensive game all the way, ending in a 26-26 tie. There was no such thing as overtime. When that final whistle blew, that was the game. In the event of a tie in the playoffs, the winner would be decided on first downs. Westlake had seventeen and the Bulldogs had eight. The Gonzales season was over. Westlake hosted Rayville for the championship.

Another cake walk. The Hornets had sixty-nine yards rushing, zero yards passing. The Rams garnered twenty-one first downs and held Rayville to three. Westlake had 375 yards rushing and 94 passing. It was truly a perfect game.

The Gonzales team came to the game and cheered for the Rams. After all, we were only a few first downs better. Some Westlake folks felt we really won State the night we played Gonzales.

So hats off to all you guys who made us proud. No matter what the future holds you’ll always be Number One with me.

From The Bayou To The Big League: The Odyssey Of … END_OF_DOCUMENT_TOKEN_TO_BE_REPLACED

Update Update on From the Bayou to the Big … END_OF_DOCUMENT_TOKEN_TO_BE_REPLACED

A quick update on my dad's book. I'm nearly … END_OF_DOCUMENT_TOKEN_TO_BE_REPLACED

I'm coming along on schedule with From the Bayou … END_OF_DOCUMENT_TOKEN_TO_BE_REPLACED