I spent the weekend of August 18 through the 21st in Tennessee attending the Killer Nashville Writer’s Conference. When I say there was wall-to-wall mayhem and murder I’m not exaggerating. I rubbed elbows with upwards of 200 mystery writers plus A-Listers Anne Perry, Janet Evanovich, Robert Randisi, Kevin O’Brien, and William Kent Krueger. Many thanks to Clay Stafford and his team for another unforgettable weekend.

In the bookstore tables lined three long walls. Every table had a place for about four authors to sign books. Competition was fierce. I did manage to sell one book, but I don’t know who bought it because no one approached me for a signature. 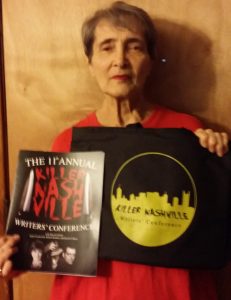 Multiple sessions went on at the same time, so sometimes the choices were hard to make. The first full day (August 19) I attended two that were the most helpful: Creating Dynamic Characters and Writing Strong Female Characters. The first one was about any character in general-male or female. The second was the one I really needed since all my protagonists are female and have to be strong with all the grief I throw at them. For anyone who read Wild Justice you know Keeley had to be strong with all the mayhem she had to contend with.

The character in my work-in-progress is a retired Army veteran, a helicopter pilot, who served in the first Gulf War and the wars in Iraq and Afghanistan. She has to be strong because the guy I created to come up against her is smart, charming, and bad to the bone. It’ll take everything she’s got to outwit him.

There were other informative sessions such as scene structuring and plotting that I found helpful. I attended a total of eleven sessions over the three days. For every one of those, four other ones were going on that I was unable to make. Like I said, some hard choices. For anyone interested in writing in the mystery genre, this is the conference, for you.

My friend and mentor Jess and her husband Jim were there, so I hung out with them most of the time. Sometimes we were in the same session.

I spent my days at the conference hotel and my nights at my brother’s lovely home out in the country between Spring Hill and Columbia. They even gave me a birthday party the day we got there—August 18, my big day.

The trip back home was not as uneventful as the one going. We had a blowout in Ardmore, Alabama, and ended up having to buy three new tires, since two others looked like they were ready to blow, also. We spent the night in Jackson, Mississippi, and yours truly here, aka Miss Graceful of 2016, fell flat on her face coming out of the hotel. It was early, so not many travelers were out and about. The only things that got hurt were my dignity and a skinned elbow. Three days after we got back I discovered that my computer power cord is probably still in Jackson. Unlike Johnny Cash and June Carter, I’m not going to Jackson.

From The Bayou To The Big League: The Odyssey Of … END_OF_DOCUMENT_TOKEN_TO_BE_REPLACED

Update Update on From the Bayou to the Big … END_OF_DOCUMENT_TOKEN_TO_BE_REPLACED

A quick update on my dad's book. I'm nearly … END_OF_DOCUMENT_TOKEN_TO_BE_REPLACED

I'm coming along on schedule with From the Bayou … END_OF_DOCUMENT_TOKEN_TO_BE_REPLACED