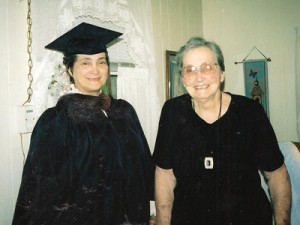 Someone once called me a professional student. Maybe it was because after graduating from Westlake High in 1954 it took me the next fifty years to finally walk down the aisle at McNeese and receive my Masters degree in English. That’s right. Got that puppy in 2004 at the tender age of 67. Unfortunately, I won’t be around to join my fellow grads from the class of ’04 when they get to sit down at the front in their golden robes in 2054. Be that as it may, that education is something I wouldn’t trade for anything in the world, and it’s something no one can ever take away from me.

In 1985 my friend Cindy suggested I go back to school. I was working full time at the Westlake library by then, and knew I could only take one class a semester. I argued that I would be in my sixties when I finally got that degree. She said, “You’ll be in your sixties anyway with no degree if you don’t do it now.”

Being newly widowed and having a lot of time on my hands in the evening, I decided I could either sit home at night doing the pity party thing or I could do something constructive in my spare time.

So, at age 50 I drove over to McNeese and signed up for one evening class—English 102. I already had English 101 back in 1954 when I attended McNeese one semester, along with three other classes.

I remember that first class like it was yesterday. Don’t remember the teacher’s name, but I can still see her standing there in front of the class. I surmised she was probably the age of my oldest daughter, Micki. I remember sitting there wondering what I had gotten myself into.

She passed out a syllabus. Syllabus? What the heck was that? Lots of reading and writing essays about what we read. Good grief. The only things I had been writing for the past thirty years were letters to family. I didn’t remember ever writing an essay about something I read. Once again, what have I gotten myself into? Thank you very much, Cindy Bryan.

The teacher assigned “A Rose for Emily,” by William Faulkner, and we were to have an in-class essay the next week. Omigosh—in class? I was terrified. I drove home knowing I was going to fail before I even got started.

I chewed my fingernails down to the quick and worried all week. We got to class and I learned I wasn’t alone in my fear. Everyone was scared. She came in and told us that when we got through writing we could leave. We settled in and soon every head was focused on the paper in front of them. Yes, we had to write in longhand.

I started writing and soon had six pages, double-spaced. I was worried because I was one of the last ones finished. I just knew it wasn’t any good because nearly everyone left before me. I turned it in and plodded to my car. Another agonizing week.

We filed in and took our seats. Small talk swirled around me, but I kept silent, waiting for the bad news. The teacher came in with a sheaf of papers in a folder. She said the essays were, for the most part, quite good. Pulling one out, she said she wanted to read it to the class. “The title of this one is ‘Was Emily Grierson a Victim or a Victor?'” I froze. She’s going to read my essay as an example of what not to do. She finished reading and handed it to me, saying nothing, and passed out the rest.

I opened it carefully to the last page, hoping I could keep the paper from rattling. I couldn’t believe it. A big fat A+. She had written, “Excellent! This follows the guidelines, has a clear focus & is very well-written.” (I still have the essay in a filing cabinet—I never throw anything away.) That one essay gave me the confidence I needed to stay the course.

So go ahead and call me names. I still take Leisure Learning courses at McNeese in writing. I’m going to keep at it as long as the old brain lets me.

P.S. If you do the math you can even figure out how old I am. I don’t do math. I’m an English major.

One last poem for National Poetry Month. I felt silly one day and wrote a limerick.

There was an old lady from Kent
Whose back was crooked and bent.
The doc said to hang
Upside down with a gang.
Now she’s too tall for her tent.

From The Bayou To The Big League: The Odyssey Of … END_OF_DOCUMENT_TOKEN_TO_BE_REPLACED

Update Update on From the Bayou to the Big … END_OF_DOCUMENT_TOKEN_TO_BE_REPLACED

A quick update on my dad's book. I'm nearly … END_OF_DOCUMENT_TOKEN_TO_BE_REPLACED

I'm coming along on schedule with From the Bayou … END_OF_DOCUMENT_TOKEN_TO_BE_REPLACED