Back when I was a junior in high school in the winter of 1953 the big doings for January was the Junior Prom. Football season was over and the Westlake Rams had had a good run. Basketball season was in full swing and the boys’ team had taken first and second place in several tournaments, and the girls were doing okay. However, the prom was coming up so basketball was on the back burner.

I had my dress—a white strapless number I had worn for Homecoming. (Back then it was okay to wear a dress more than once, especially in small town Westlake.) I had a date, someone to take me, so I was good to go. All was well—until ten a.m. or so. It came one of Louisiana’s gully-washes. A real frog-strangler—pardon the cliche—but that’s the best description I could come up with. By mid-afternoon the dirt roads out our way were a squishy mess. 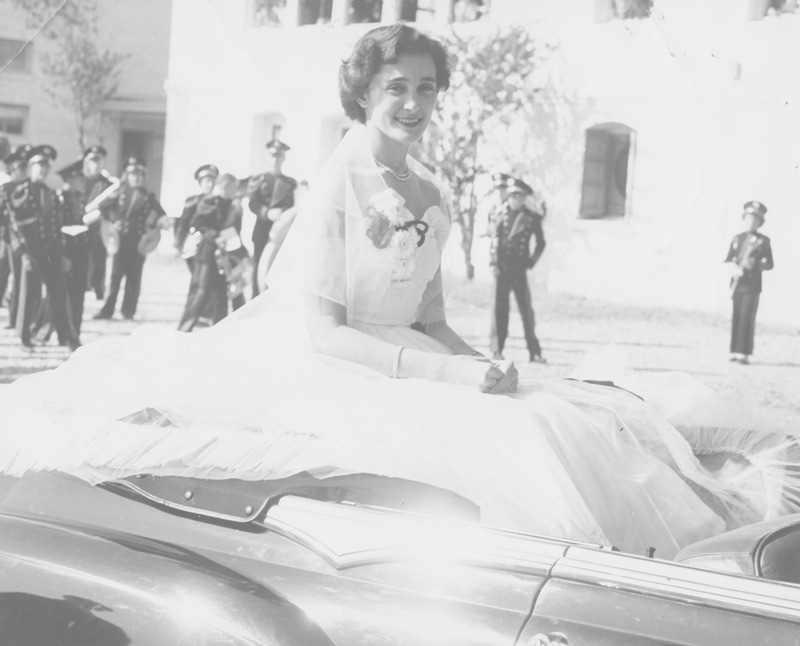 I was ready to go by six o’clock—all dressed up in my white taffeta and armed with a red carnation boutonniere for W’s sport coat. He showed up around six-thirty looking great in navy slacks and a powder blue jacket. His eyes, unnaturally bright, should have warned me that things were starting to go south.

His face had a ruddy hue and his voice was raspy when he answered my mother’s query about how he was feeling. “Fine,” he croaked, and I knew all was not well in West Fork.

He insisted he was okay, so we exchanged our carnation creations and got into his parents’ big Buick sedan. As soon as we crossed the cattle guard and turned left onto the road the car stopped. No amount of revving and floor-boarding would make it move.

Somehow we managed to get out of the car and back to the house without ruining our clothes, but we did have to clean up our shoes. It looked like we were going to have to miss our prom. The End of the World, as far as two sixteen-year-olds were concerned—until my mother had one of her bright ideas and called Mr. Morgan.

Mr. Morgan was our bus driver. He also lived about halfway down Phillips Road from our house. He also had a tow truck. My mother could be quite persuasive. She also had no fear when it came to asking for favors. Mr. Morgan came to our house with his tow truck and wearing a pair of hip boots. He got the two of us ensconced on the front seat of the truck—white dress, powder blue jacket, and red carnations. After hooking the car to the truck, he drove us to the high school gym in Westlake, where we created quite a stir when we exited our Cajun limo.

I had a good time at the dance. I can’t speak for W. He acted like all was well, but he spent the following week in bed with the flu. We danced and ate and mingled until they shut it down at midnight. We didn’t try to go back to my house down Westwood Road. He drove the Buick back to his house and I spent the night across the street at my friend’s house.

That was my first and last prom. The guy I was dating the next year was a good Baptist and didn’t believe in dancing, so I missed it. However, I’ll always have the Prom of ’53 in my box of memories.

From The Bayou To The Big League: The Odyssey Of … END_OF_DOCUMENT_TOKEN_TO_BE_REPLACED

Update Update on From the Bayou to the Big … END_OF_DOCUMENT_TOKEN_TO_BE_REPLACED

A quick update on my dad's book. I'm nearly … END_OF_DOCUMENT_TOKEN_TO_BE_REPLACED

I'm coming along on schedule with From the Bayou … END_OF_DOCUMENT_TOKEN_TO_BE_REPLACED